So I've recently begun doing some work on a custom implementation for displaying listings of ZX81 programs (a macOS Quick Look plugin, for the curious), and wanted to figure out what the behaviour would be for REM statements that contained some of the control characters (118/newline and 126/number flag). The results I discovered were rather interesting...

(Note: the listings were produced by issuing a 'LIST'; simply typing newline can produce an endless loop)

Given the following program: 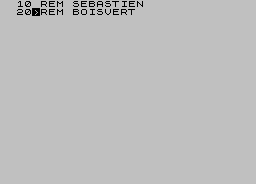 This is where the listing code thinks the end of line has been reached (the early 118), and treats the rest of the line as though it's the next line to print (up to the end of the original line)

Since skipping the next 5 bytes goes past the original line, the next line becomes part of the first in the listing. Line 20 is still editable however. 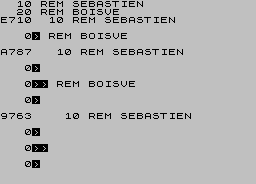 In this case, the listing goes past the program, and starts reading into the display file.

Now I don't find it surprising that the LIST code didn't take into account that a REM statement would contain control characters that wouldn't be part of a normal BASIC line, as that would have taken up precious space in the ROM to try to avoid this behaviour. But I was a bit surprised that it doesn't use the length of the line to properly detect when to stop evaluating the line, given that the length of each line is encoded within the BASIC program - making sure not to go past the end of the line shouldn't have been too many more bytes of code, and if the length is not used otherwise then it seems like a waste of memory (though I think the length is used to determine where to put the editing cursor, which would explain why line 20 is still editable).

I guess this was likely considered a fringe case, which is also easily avoided by using a double 118 sequence to hide the entire REM contents.
Top

I think the length is used to quickly find the next line when finding a line number for GOTO or GOSUB.

Or as you found out yourself: Find the line to edit it. So anytime you have a line number, the ROM uses the length of the line to quickly skip down to the line searched for.
Last edited by mrtinb on Tue Sep 17, 2019 7:55 am, edited 1 time in total.
Martin
ZX81, Lambda 8300, Commodore 64, Mac G4 Cube
Top

Yes, the basic header line length is use to target the line offset, and many REM lines was locked by two 128 tag at 16514,16515.
The Nxt_Line variable is update to the line lenght, and don't change while the Inside new/line characters.

The REM line will be protected from LIST function by the line length.
Xavier
Top
Post Reply
3 posts • Page 1 of 1