Minority interest I grant you but worth mentioning I feel.

Those of us who use h4th may have noticed that when using an inverse screen the furthest column to the right always remains "uninverted" (see Picture).

One idea put forward suggested a timing problem being that H4th seems to be a 50 hz clone of the American 60hz Pluri-forth by Tree software.

I always thought it to be a problem with ROM image we all seem to use being culled from Eighty One and that it was tweaked in some way as the emulator doesn't behave like real hardware video wise, but a forum member who has the genuine Skywave ROM posted pics showing it to behave in the same way so that put that to bed.

Long story short I put the new ULA in my forth zeddy to bring it up to scratch video wise with my others and yay all characters now inverted and no blank right hand column. 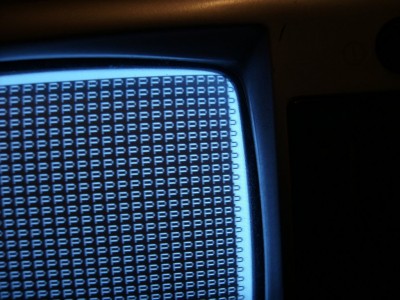 Very odd indeed, has you an image of said ROM that I could play with myself? I would be interested to hook up the logic analyser and see what's going on.

The ROM can be found here...


The only difference between this and the bugged h4th ROM found in Eighty One(still there) is a minor correction to a maths routine, the display routine is unaltered and with a standard ULA the image problem is still there but your ULA corrects it YAY!

It should be noted Eighty One doesn't exhibit the inverse display error so assume some trickery in said emulator to make it work or perhaps its' virtual ULA possesses the same spot on timing accuracy as your little marvel?

I've seen this when using the ROM display driver and printing 34 characters without an ending halt-character. To my understanding, this is t unfortunately the behaviour of the original ULA hw that somehow ignores the invert-bit after only 2 pixels.
/Adam
Top

This seems the most credible answer to this little puzzle, many thanks for that, Adam.

Just a thought, was the h4th ROM originally written to run on a TS1500?

Only that machine has a Timex “ULA”.

Interesting to know if the Timex ULA works differently in this regard. Anyone up for testing?
/Adam
Top

Only that machine has a Timex “ULA”.


No the original EPROM based software was originally called Multi-Forth ,then changed to Pluri-Forth, by Tree systems, Grand Rapids Michigan, for the ZX81 and TS1000.
The original copyright message being, "FORTH-TS2.0 BY TREE SYSTEMS"
H4th seems to be a later adaptation(with a maths bug not found in the US version) for UK/European use.

The H4th manual states H4th is based on Bob Alsum's Tree-Forth for Tree-Systems which was either a renamed Pluri-Forth or a misinterpretation by Skywave as to the correct name though will stand correction if others know different.

An interesting thing about the original US version for the TS1000 is that the circuit board had two sockets , one for the 2764 Forth chip and the other for the original ROM, switching being done via connections to the TV channel switch.

Skywave intended a similar style board to house a mooted but unrealised floating point unit as well as the original ROM, but I'm certain this never saw the light of day.
Top
Post Reply
8 posts • Page 1 of 1