It was so exciting to see the Aszmic ROM.
Top

40 SMD micro switches later and I now have the keyboard mounted on the zx80core. 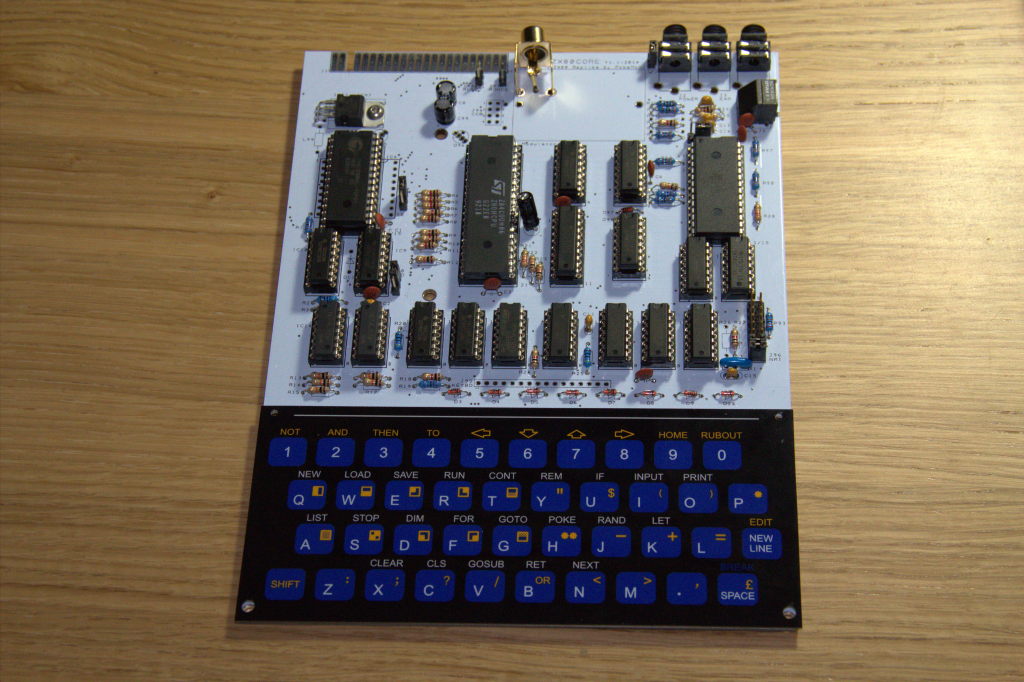 That's with the single-image ZX80 ROM that Karl sent me - thank you! If I put the multi-image ROM in, nothing works in any switch or jumper position. I've got an EPROM programmer here somewhere, so I'm going to use that to check the other ROM and reprogram it if necessary. Otherwise, I'll have to check things some more, around the switch and the ROM socket.

Still, I have a working ZX80 at least! Hooray!

Thanks for all your help, guys!
Top

I am not sure what did go wrong - maybe the EEPROM has not been programmed properly or lost data due to some other issue.

If you send me your email I can provide you with a 32kByte image.
The 28C256 should be programmed through most programmers I think.
I don't think that there is something with the switch but this could be measured easily.
It's a hexcode which gives high to the 4 signals through schematics regarding to the switch value (0-F).

You can also verify the corresponding address tables in appendix A2 of the manual.
Top

Curses, v1.0b board was not as successful as the v1.1 build. Now onto the job of debugging what I got wrong. Will take me a bit as away on business next week!
Top

I'm still chasing one final fault on my build. I've been trying to eliminate things one by one. The point I've reached is that if I use the 8K EEPROM containing only the ZX80 ROM, with the /WE pin disconnected from the board and left floating, it fails to boot up and the LED flashes rapidly green/red. Fair enough. If I force /WE high, everything boots up fine - that's good. In such a case, the EEPROM is read-only. But if I force /WE low, I would have expected it to boot up with the EEPROM not write-protected. Instead, it reverts to the flashing LED and refuses to start, exactly the same as if /WE were disconnected. So, with all the pins connected as normal through the switch, positions 4 and 5 work but not positions 0 and 1. I'm having probs with the bigger EEPROM too, but it doesn't seem worth trying to solve those until I have the smaller one performing as expected.

It's just driving me nuts!

There are 2 solutions:
/WR signal should be connected when using an EEPROM and can be overridden by the ROM switch with high through J100.
It must not be connected to GND because this way you give a write command to the EEPROM.
So system cannot startup this way.

The connection to GND is for EPROMs only which have an additional address line instead of the /WR signal. To choose a particular page you have to connect this address line to either GND (over J100 via internal resistor) or +5V with the ROM switch. This was fixed connected to /WR signal before but then you never have been able to select the pages with that address line low.

I am not sure if I corrected the address tables of the bigger EPROMs 27C128, 27C256 and 27C512 when changing the connection of this signal (which was accidently fixed to /WR in previous board versions).
Top

/WE for a flash or EEPROM should only be taken low if the computer system it is in can reprogram the chip. This is not something this system can do, so /WE should not be connected to 0V ground.

When the EEPROM /WE is low, the chip is expecting data to be supplied to it, so it will disable its outputs...

1024MAK wrote:/WE for a flash or EEPROM should only be taken low if the computer system it is in can reprogram the chip. This is not something this system can do

Well in that point you are wrong.
It is surely possible to program the EEPROM inboard, I did before while patching the character set for example.

But it doesn't make any sense to connect the /WR input fixed to GND, but can be connected to /WR of CPU.
Top

Aha - thanks both of you. My biggest problem has been understand the switch circuitry - ridiculous really, since that's not even a part of the original ZX80 design. But I've improved my ability to read the schematic!