Now that some of the members of this forum have a 3D printer... would it be possible to make replacement ZX Printer belts on one?
Rich Mellor
RWAP Software
RWAP Adventures

Well I thought that - but I did have a couple of sealed replacement belts which looked more like plastic than rubber - weird...
Rich Mellor
RWAP Software
RWAP Adventures

I think its sort of inbetween, which may be why it fails so often.

Flexible, but plastic that is stiffer than rubber.

I ran across this recently. http://digilander.libero.it/zioclive/zxbelt/

I haven't tried it myself, though I might, because I have a printer with a belt that decided to break into no less than 4 pieces.

Thanks for the information.
I have a ZX-Printer with this problem and I will try to repair it.
Top

retrolab wrote:I have a ZX-Printer with this problem and I will try to repair it.

Do let us know how it comes out. Take pictures!

Taking a closer look at the link I posted, I wish there were more/better pictures of the staple. I'm a little confused by that part of the process. There is a picture of a stapler straddling the belt, but then the other photos show ...well,... I'm just not sure what I'm seeing. It certainly doesn't look like what we in North America call a "standard" staple.

I have two flat belts salvaged from scrapped VCRs. Both are just a teeny bit too long to use as is. I've ordered some from eBay; perhaps given a certain stretch tolerance, one will be right on. Then I will have to figure out my own method of attaching the little wires that do the printing, which may or may not use what serves for a staple here.

Oops, just discovered where I "came across" that link. I think it was here. viewtopic.php?f=7&t=125

A staple (in Europe) is what is used to attach sheets of paper together.

They are U shaped, and fit in a stapler which forces them through paper, and then has a backing plate which folds the ends over into the middle.

See diagram - top is a staple before use, bottom is how a staple looks after it has been put through the paper.

For these purposes, the stapler has been placed so that 2/3 of its head is over the rubber belt and the other 1/3 or so (2.5mm max) is sticking out to the side.

What they have then done is to cut off the upper part of the staple, so that you basically end up with something like the diagram below - where the blue indicates the rubber belt...

It is conceptually the same here. I am thinking only the gauge and/or overall size of the staple may be different.

Your second diagram matches my "best guess" as to the configuration for the repair. I was unsettled by the original photo which seemed to show the stapler ready to put a staple "around" the entire belt, and the two of abbreviated staples sticking out, which don't seem to match that "halfway" placement. I am also concerned that (1) my staples are too thin to support the styli, and (2) that the staple might pivot in actual use. My particular stapler does not curve the prongs inward very sharply, but that varies from unit to unit.

So I got to thinking. (Never a good sign.) If cyanoacrylate glue (Krazy Glue) can splice the severed VCR belt together, could it not be used to repair the original belt? I am thinking of using pieces of VCR belt as splicing tape to fasten to the back, or outside, of the original tractor belt, thus eliminating spacing, measurement, and stylus issues entirely. i.e. create a splice as is used in a cassette tape to butt-splice a length of leader to the magnetic tape--an analogy we should all be familiar with!

I think there is enough clearance at the back of the belt for a thin piece of VCR belt to piggy-back. My own belt is in 4 pieces, with another spot close to an existing break just ready to go, so it would make a good test. I will pick up some Krazy Glue and try it soon, and report back.

My guess is that actually about 2/3 of the staple is across the belt - it is all about picking the right staples as they come in numerous sizes...

The suggestion of gluing another belt on the outside should work - it depends on how badly disintegrated your original belt is - I have had one in about 10 parts with some bits a few mm long!

I tried, and failed, to repair the original belt.

My method of splicing the original belt using sections of VCR belt was working for a splice or two, but it turned out I had altogether too many breaks, and weak spots which turned into breaks during handling. I could not keep up. 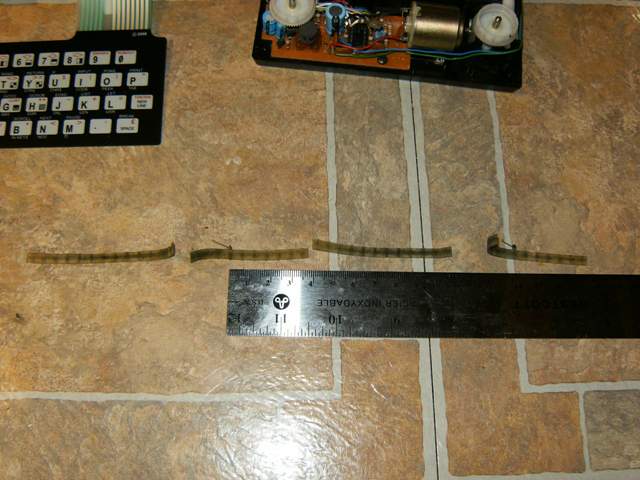 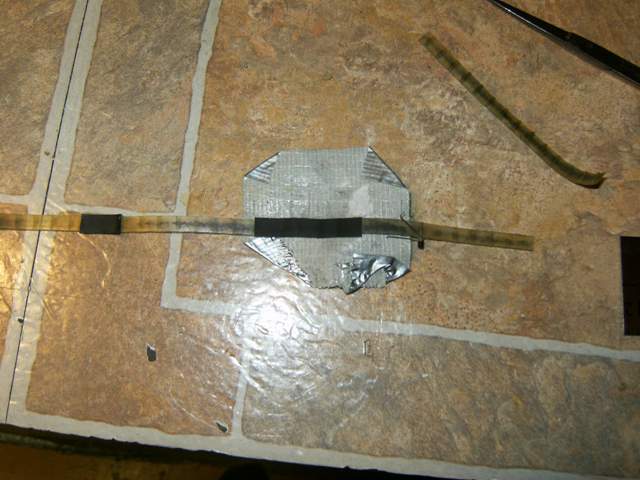 For example, prior to using the Krazy Glue on a given section of belt, I tried to clean the heavy coating of black dust from it with alcohol and a Q-Tip so that the glue would work. Even that simple act caused more breaks. Worse, I would tend to break the belt right next to a splice I was working on, and having glued the repair belt over the original break, there was no more room to piggy-back more repair belt onto the second break.

It multiplied and got bad fast. Oh well--nothing ventured nothing gained.


Fortunately I had 2 salvaged VCR belts to begin with, and had deliberately used the thinner one. So belt 2 was earmarked to try the method as originally laid out in the website linked previously.

I got carried away and forgot to take pictures of my staples. Sorry. Rich's second diagram is perfect though. That's what you aim for.

Practice stapling on an extra piece of belt if you have one, or even a piece of paper if you don't. Mark the paper and try to hit the mark. The skill you need to acquire is knowing exactly where the staple will end up, simply by looking at the position of the stapler. This is harder than it sounds. You need to be right on the mark, and only experiment will tell you exactly where the staple comes out just by looking at the stapler orifice.

Getting the staple trimmed and holding fast to the belt was easier than I had feared. A careful squeeze with a pair of needle-nose and all was well.

A piece of insulation from the inner wires of a Cat5 cable are the right diameter for the spring section of the styli, to centre it, but not to cap it. I glued mine for the time being. I may re-address it in future.

My belt was wider than ideal. I trimmed it (very carefully) with a pair of surgical scissors.

My belt was also significantly thinner that the one originally used by Fabio. I had zero confidence that a butt splice would hold. So I did an overlap splice. The pullys seem content with this.

Ah, but be careful. The end result must be 275 mm with the styli 137.5 mm apart. Mine are not quite precise, and I think that is the source of distortion at the end of each line in my results. (The error seems to accumulate from left to right across the line.)

If you use a whole belt which stretches slightly to the correct length, (usually a good thing), your measurements will be difficult. If I had to do that, I think I'd place the belt on the pullys, and then mark the two halfway points on the pullys, i.e. the two points of apogee. That should work.

So here's my results. It doesn't look perfect, but then it never did. I have another printer I bought in the 80's which has not been repaired, and it misplaces pixels too. If anything, this repaired one is slightly better because the beginning of each line is very clear. Go figure. As gozzo said somewhere, it's a wonder these little printers work at all. 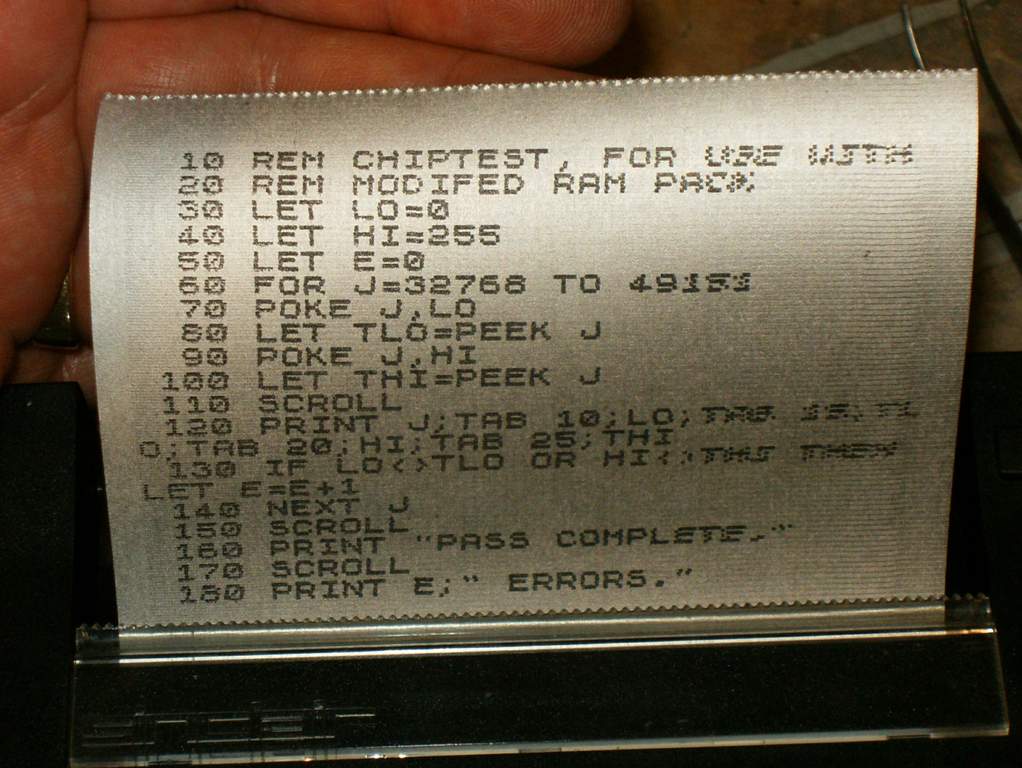 I don't know how long it will last. But then again, I am loathe to print anything on the irreplaceable paper anyway. Like everything Zeddy, this whole project was "just because".