I bought a couple of machines on eBay (in case one had issues) and my aim is to refurb them both, and if possible sell one to recoup costs for the one I keep. I intend to do the 16K mod, composite mod, and then add a WESPI. I have all the parts necessary. So far I have installed a composite mod to one of the ZX81s - the Issue 1 which has the old ULA. However it hasn't worked as expected. I get a composite signal, but the left edge of the screen almost as far as the K prompt is missing. Adjusting the two trimmers makes a very small difference to this but cannot correct it.

Any ideas what the problem could be? I bought the composite mod PCB with components pre-installed from eBay. I presume it's the same circuit as the various ZXvid solutions which, judging by the components that are present, all seem to be derivatives of Joulespercoulomb's work over on YouTube. The right-hand edge of the picture is sharp, presumably because the signal oversteps the extent of the overscan area that this LCD renders. The left-hand edge is fuzzy and somewhat rippling. The contrast of the K isn't great either - and the trimmers don't adjust this. I used silicone covered 24AWG multistrand wire, applying flux pen and pre-tinning each connection, and cleaning off with IPA afterwards. So I'm confident the connections are good. I'm beginning to think the rating of one of the components in the mod may be off, especially since the mod's purpose of creating the back porch phase of the signal will impact each horizontal scanline. Logically it could very well cause a distortion like this if that waveform isn't quite right. As you can see from the difference in the width of the black bars on the TV the left part of the image is black. It's not a centering issue - the TV even lacks any kind of control for that.

I haven't yet replaced the two main electrolytic capacitors on the motherboard but from another post on here I gather they're pretty peripheral to the ZX81's main functions, especially since the video signal comes straight off pin 16 of the ULA. 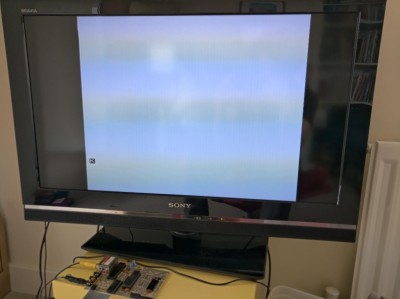 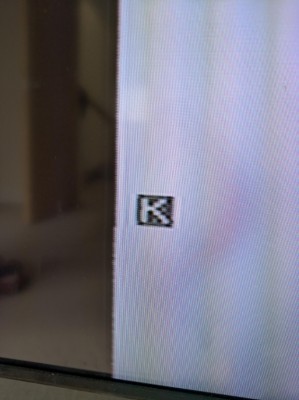 I'm the least qualified to comment on hardware issues but that picture looks like my TV when I switch it to 4:3 mode rather than 16:9 or wide screen, exactly like that.
I also find reducing the colour to zero and fiddling with the sharpness control helps, assuming your TV possesses all of the above.
Top

I think you misunderstand my issue. The 4:3 aspect is deliberate so black bars are expected. The ZX81 was not built to output a 16:9 ratio picture so I don't want to stretch it out to full screen. No, the problem is that there is an inch or so missing off the left of the picture - basically the entire border region. Note the position of the K prompt. Below is what it should look like. This is the RF output of my Issue 3 model, which has the newer ULA with the more compliant video signal: 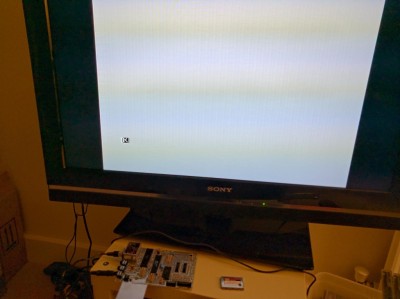 I can improve the left edge very slightly (by a few mm) by adjusting one of the trimmers in the mod to its fullest extent. So my suspicion is that the trimmer range isn't large enough.

The other thing I don't get is that the signal is meant to be luminance only, so why have I got loads of yellow on there? There should be no chrominance component to the signal.
Top

I think the electrolytic caps only affect the reset circuit or similar so won’t have an affect.

I have composite modded 30 or 40 zeddies and not seen that with the left border but then I have always used the ZX8-CCB. Superb bit of kit.

I have on occasion seen some ‘almost colour’ on the screen before which surprised me on a back and white computer but Mark gave a very good explanation of that which I think from memory boiled down to the picture not quite being good enough for the TV and the TV misinterpreting it as colour.

I am aware that the ZX81 is 4:3 device but in my experience when shown at 16:9 there is no "stretching" as you call it or out of proportion display just a decent full screen picture which is certainly preferable to big side bars.

Have you tried turning the colour off to get rid of the "colouring artefact"? I only ask as you haven't mentioned it.

Also if one is composite output and the other RF output then regardless of ULA not a like for like display comparison I would have thought, if the issue three has the same display as the issue one in composite mode( yes it's a faff to swap the video board I know ) then that would point to a defective composite board and eliminate both ULAs no?
Top

No other TVs with composite unfortunately. The latest beast is HDMI only. My 48K Spectrum is fine over composite on the same TV used in these example, so the loss of the left border is not a TV issue.
Top

Three things that I want clarify first.
So, can you please either post a photo of your ULA in the machine you are having trouble with, or provide the ULA part number. And actually tell us which composite video mod. you bought.

A further thought, you could try removing the NE555 chip from it’s socket (be careful not to bend any pins when extracting it) and then try your ZX81 again to see if the position of the left hand side of the white area moves. Note that removing the chip will disable the ‘back porch’ circuitry).

Ahh, I was trying to be too quick, ‘cus I was rushing, I wanted to walk the dogs on route to posting a letter in the nearest post box...