Below is a schematic of the circuit that I am currently using. 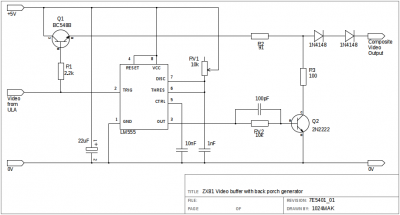 I've changed resistor R3 from 47Ω to 100Ω. I've removed preset resistor RV2 and replaced it with a fixed 10kΩ resistor, with a 100pF ceramic capacitor in parallel.

Here is a photo of what I get on screen when using the board with the alterations detailed above, but using the supplied 'NE555P' timer chip: 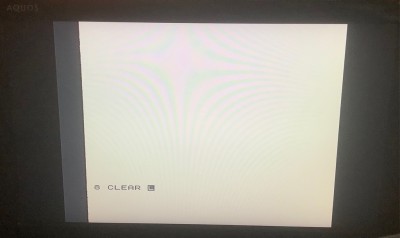 Screen display when using the supplied NE555P, with the brightness turned up

So that's still no good. It is better than the results I had before I modified the board.

Lets have a closer look at the chip: 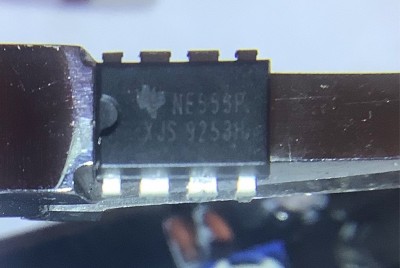 Supplied NE555P, notice how bad the printing is.

So being very suspicious of this chip, I removed it. I fitted a CA555CE which is a RCA part that I bought from Maplin Electronics many, many years ago (before they opened lots of shops and well before they went into administration). 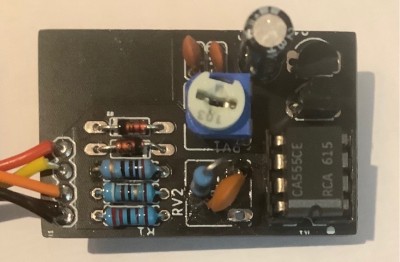 Board with a CA555CE fitted

Here is how it looks on screen: 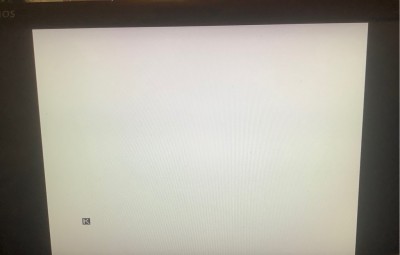 Screen display when using a CA555CE

And here is what the signals look like on my oscilloscope: 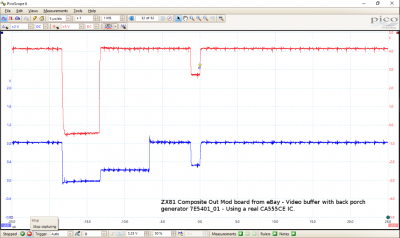 Oscilloscope screenshot of the board with a CA555CE fitted

The blue trace is the output from the board as it goes to my TV. As you can see, the board now adds a second level after the line sync pulse. This is the result of the 555 timer chip doing it's stuff. After a very short delay, the time delay from the timer chip ends, and the 'back porch' pulse ends. There is a bit of overshoot, but as this is off screen, it does not matter too much. The level then returns to the white level well before the TV starts to display the picture information. I'm not sure if changing R3 to 100Ω is the best value yet, but it's much better than when R3 was 47Ω.

So next, I grabbed a real TI NE555P that I bought from Rapid Electronics about three years ago. 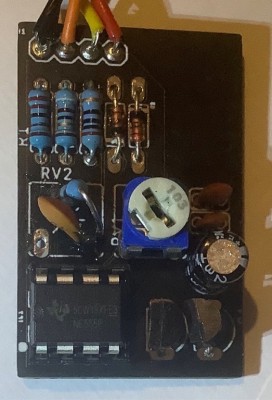 The board with a real TI NE555P fitted 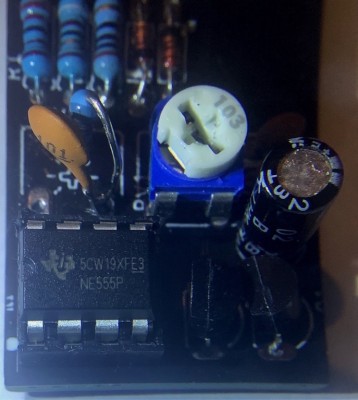 Close-up photo of the real TI NE555P from Rapid 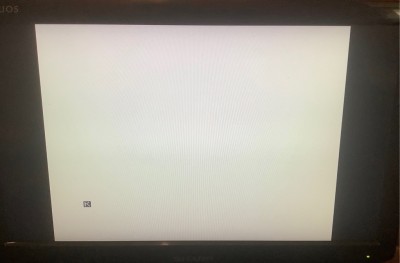 The screen display when using a real TI NE555P from Rapid 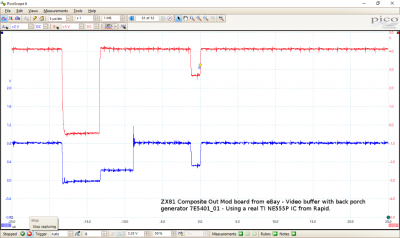 Oscilloscope screenshot when using a real TI NE555P from Rapid

So, I also have some timer chips that I got from eBay some years ago (December 2018), when I was investigating what you may receive for your money. 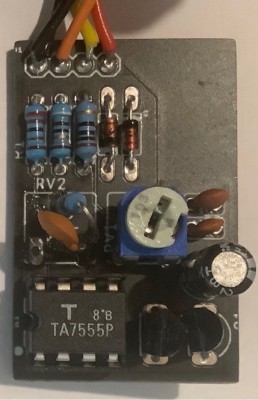 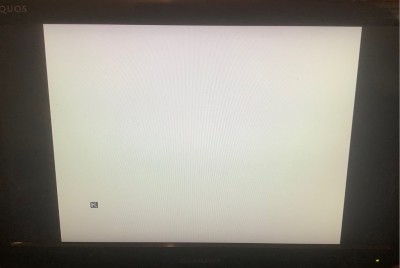 The screen display when using a TA7555P 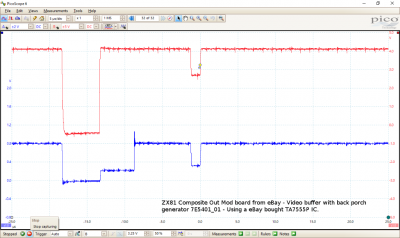 Oscilloscope screenshot when using a TA7555P 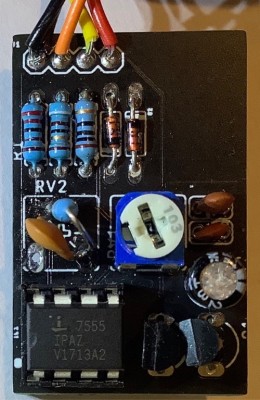 The board with an eBay bought CMOS 7555IPA 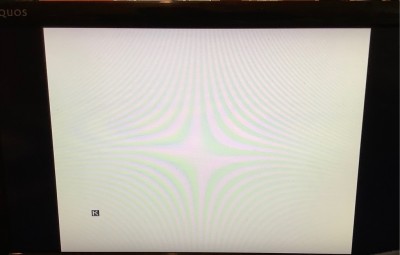 The screen display when using an eBay bought CMOS 7555IPA 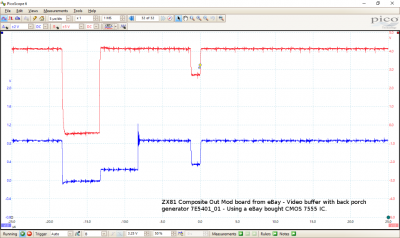 I've no reason so far to suspect these chips of being out of specification, I was careful on which seller I used. And the 7555 both on paper (that is, referring to the datasheet) and in practice, does have the better characteristics, allowing more adjustment range. Hence why I recommend using this type.

I've received (yesterday) some new 7555IPA chips from Rapid, but have not had a chance to do any further tests yet.

Are you planning to continue to experiment with a new value for the 100R resistor? Or should I place an order for the 7555IPA and those replacement resistors and cap? I guess I could order a few values either side.
Top

When I did the calculations to select the value to use for R3, it came out as 103Ω. Hence why I selected a 100Ω.

The next one down in the standard E12 series, is 82Ω. I have some in stock. But I think that may be too low.

For the next nearest E24 value, that would be 91Ω, but I don’t think I have any, and so would have to order some of those. So that will take a while.

On my TV, I was happy with the picture. Keep in mind that unfortunately the TV I used has an automatic picture improvement system, which as far as I know, you can’t completely disable (I’ve already been through all the many menus and switched off everything that I can).

It may not be necessary to remove RV2. Instead use a multimeter to set it to maximum (10kΩ). The main reason for removing RV2 and fitting a fixed 10kΩ and 100pF capacitor, was to see if this would speed up the switch off of the transistor. But if a 7555 is used, this should not matter as much.

Also, notice how in the shot of the product installed in a ZX81 it contains a different 555 IC, the TLC555CN - not the fake Texas Instruments one we received. So no wonder he thinks it works!
Top

Also, notice how in the shot of the product installed in a ZX81 it contains a different 555 IC, the TLC555CN - not the fake Texas Instruments one we received. So no wonder he thinks it works!

The TLC555CN is the Texas Instruments CMOS version.

I suspect on his own system, he used a real TLC555CN. But in order to cut costs, bought a load of cheap NE555P chips to fit to the ones he sells. He probably did not know that they were fake / out of specification.

My parts order just arrived. With the 7555IPA inserted and no other changes (apart from dialling RV2 to its max value of 10K), the picture is cured of that missing left-hand border. The brightness is corrected so the back porch signal is being created successfully. However the black level is definitely too bright also. It's more of a dark grey than black so I will substitute that 47R resistor for 100R as per your guidance.

Thanks so much for all the help Mark!
Top

Re: Composite mod issue: left side of screen missing - solved!

I switched R3 from 47R to 100R and that improved the black level a lot.

I've done a bit of testing, and I got rid of RV2 as in your example and replaced with a 10K resistor and the 100pF cap. That didn't seem to be needed, but I didn't want to take any chances so I put those in as I'd noticed they're consistent with the Joulespercoulomb design. I really don't want to be coming back to this modulator can thing again - it's been such a pain. The solder that was used for the mod is garbage, it has no sheen whatsoever - just as in this example of crap/counterfeit solder.

Then I also added a 1K resistor in parallel with R2 as per your suggestion. It seems to get rid of some jailbarring in large areas of black. It worsened the picture when added across R3 (raised black level).

The black level remains a bit higher than the system with the newer ULA, but overall it's probably good enough.
Top
Post Reply
65 posts