Uncharted routine seem to be moved in the main ROM routine…
To be called with a "Lprint" command.
ROM offset ?
Lenght ?

Hi,
Some text files to compare the original rom, to the IF patched rom...

This ROM is patch on the display, load and save routine entry ! (VB81 ROM)
Top

The asm code seem to be cut !

The topic is very interesting and I would really like to help here but it's not an easy task.
I have the Centronics interface and a Zeddy of course.
But I need to save any results/images to something.
I have both zxpand versions and zxblast and also zxnu.
But any of these interfere with the ROM content. And none of these allow the usage of the internal 1K RAM. I heard that Centronics interface uses the internal 1K RAM to modify the ROM code.
I will need to build a battery backed RAM so I can make sure to save the content there, switch off, take zxpand and save what is in the battery backuped area.
Any better idea?
In theory, there is no difference between theory and practice. But, in practice, there is.
Top

Or maybe use a regular Sinclair 16k RAMpack, and save to Tape

The internal Zx81 ram can't be used, the HRG Memotech had to "copy" the Main rom in it to Rebout the monitor!

We had to compare the mirrored room address to target the right mirrored segment.
… to create a new rom... to use the IF card for the "zxpand" card.
The best way to dump this rom is to write a tape file… and convert it in a "p" file.

I asked to Philippe to dump his rom with a Centronics I/F, and he will send the printer listing to me.

We will be able to reconstruct the patched ROM image to use the I/F ROM.
same problem to use the Memotext image using the "zxpand"... with the "auto-load" switch/IF card. 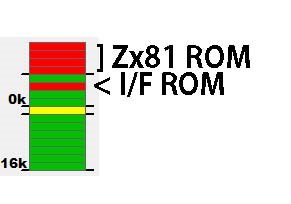 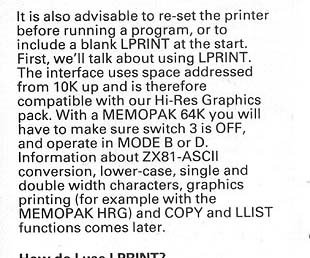 saverom saves a ZX81's ROM in the usual ZX81 tape-saving format.
Normally you can't save anything other than Basic programs from a
ZX81; saverom gets around this by only using the save-a-byte-to-tape
routine, and doing the rest itself. The saved ROM should be readable
by anything which can read ZX81 tapes (e.g. zx81get) and which doesn't
check that the actual data looks like a Basic program. The ZX81
filename given to the saved file is `b', mainly because this helps
keep the program short.

Note that saverom does *not* require a 16k ZX81 - it will work
perfectly well with just the 1k, and in fact I recommend running it
that way to avoid any possible problems with RAM pack wobble.

Before running saverom, you should obviously check that your tape
reader can cope with reading the ZX81's output (if it's connected
directly), or a tape saved from it (if not).

Note that you may *have* to go via tape (or some other kind of
recording) if your machine's sound device isn't getting the signal
from the ZX81 to a high enough level. (Indeed, I had to do this myself
when testing the program.) A `noisy' signal generally isn't too much
of a problem with zx81get, but the signal does still have to be at a
decent level.

With that out of the way, the usual way to get saverom across to the
ZX81 is to type it in (an alternative approach is described later on).
The machine code is designed with this in mind, so it's relatively
short and can be entered as `Basic' directly, without having to enter
hex or anything.

The "code here" bit is listed below, with separate tokens/chars
separated by spaces for clarity (but *don't* type any spaces unless it
actually *says* "space"!). It's listed on multiple lines, but should
be typed on a single line 10 (after the REM):

A few things need explaining about that:

- 0 is zero, O is capital o. It's very, very important not to confuse
the two.

- RETURN and RUN need to be entered in K mode. To do this, type THEN
(shift-3) followed by the keyword, then go back and delete THEN,
then move the cursor forward again. So for RETURN for example, it's
shift-3, Y, shift-5, shift-0, shift-8.

You might want to see how that looks on a ZX81 once it's typed in
correctly, to check you've got it right, so there's LLIST output here
in listing.png.

Skip this if you decided to type in the program.

If you'd rather not type in the program, and have a Linux box with a
suitable sound device, you could try using my `zx81send' (see
zx81send.c in ../tetris-src.tar.gz) to send the program (a copy of
which is here as saverom.p, in case you want to do it this way). But I
won't say any more about this, as it's probably easier to keep the
transfer one-way.

Once you've got the program in place, and everything's ready to go,
run it. There should be a few seconds of silence before the data
starts being saved, and you'll see the usual tape-saving pattern on
the screen. The saving process should take less than 4 minutes. If
things go wrong on the receiving end (for example), you can press
space (break) to abort, and re-run the program to try again.

So if you get that output, you know you've successfully transferred
the usual ZX81 ROM. If not, try a second transfer and see if the files
match - I believe early ZX81s had slightly different ROMs, so it could
still be ok. (But if the two copies don't match, something's clearly
gone wrong.)

BTW, after saving the ROM, saverom leaves the ZX81 in FAST mode. This
shouldn't be a problem, but I just thought I'd mention it.

FWIW, assembly source for the machine code is here as saverom.z. 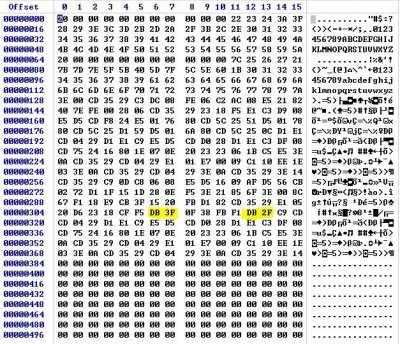 The "DB" is an IN opcode, but it's use as an OUT commande:

Where the actual A register is sent on the data bus, and the n address on the address bus.
It return A register, but it can be ignored !
Top 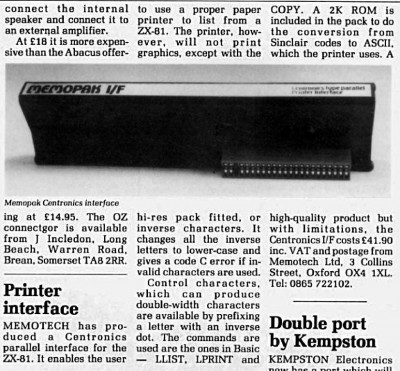