I was recently close to buying a Fuller FD42 Keyboard/enclosure but I changed my mind in the end as it was a 2 hours round trip to collect it. I don't know anything about the FD42 in use however having only ever seen photos of them. I guess it won't be up to the full mechanical feel of the memotech but Is the keyboard reasonably good?
Top

In my opinion the Fuller is better than the Memotech from a mechanical and "feel" point of view when using the keys.

The Memotech looks glossy but the key action can be a bit hit and miss after a while, as it uses 2 flimsy copper strips in its switches that rub together to make contact, rather than click if you follow what I mean and over the years I've replaced quite a few of the switches whereas the Fuller has a "satisfying" feel to its keypress is much easier to type with and is less hit and miss if that makes sense plus the key legends tend to wear better than the Memotech and I've never replaced a key yet in the Fuller.

The "click" the Memotech makes is just the key top bottoming out on the plastic underneath not a mechanical click type switch mechanism.

The plastic case of the Fuller is a bit shoddy and quite brittle but owning both I much prefer the fuller in use over the Memotech and as for Kayde keyboards they make nice paperweights.

The only stumbling block with all of these keyboards is using software that requires some typing (not games) and contains its own keyboard routine rather than the one contained in the ROM, you learn to use backspace quite a lottttttt.

Thanks for that Moggy, it sounds well worth owning one. I'll definately look out for another one coming up for sale. I knew I would regret not getting that one the other day

There are 2 versions of this keyboard,Tezz.
One,like mine, where the m/board is mounted in the traditional manner and the expansion slot is at the back. The other version has the board spun through 90 degrees with the expansion slot now inside the case usuallyconnected to a de-cased Sinclair ram pack via a connector board or as below a zxpand.

Picture from this thread.. 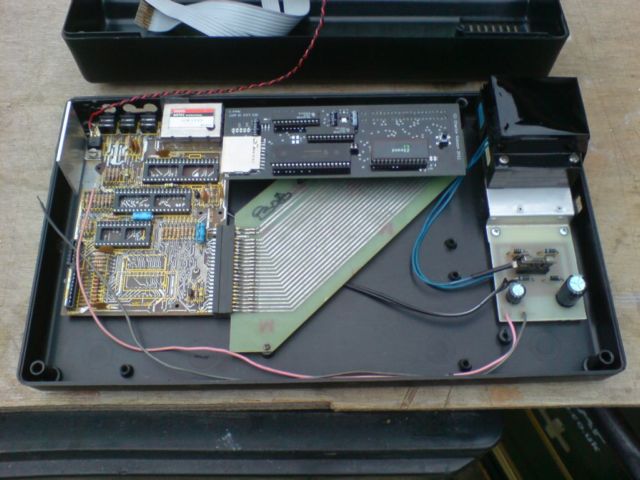 The 90 degree layout with everything contained internally is brilliant. I hope I can find one for sale.
Top

Well, I've managed to find and buy an FD42 tonight, I'm not sure which version it is until I collect it midweek. I hope it's the 90 degree layout version but either way I'll be happy if it's working. Is it straight forward to strip the keyboard down for cleaning? Is it possible to pull the keycaps off?

The caps do come off but are well fixed on so be very careful as there is virtually no gap between the keys unlike the M'Tech and it's very easy to bend/break the key stem underneath if the cap isn't levered off equally.
Top

ooh, my 'work in progress zx81 in fuller case with possible internal zxpand'... i STILL havent finished that !!
Top

If you want I can modify your ZXpand to have its SD card socket on a flying lead. Another option is to wire up a serial connection so you can squirt new programs on to the SD card.
Top
Post Reply
68 posts