Yes - it is one of the first boards Issue One without solder mask / stop mask.
And in a very good condition.
I wouldn't change anything - and if it works it's better.
Good for collectors ...

Don't worry about the brown on the backside - this is just the rest of solderflux due to the amount and big copper areas/metal case it couldn't get hot enough to get all vaporized. This is typical for modulator and the 3.5mm connectors.
Top

The first two (were there more than two?) Sinclair User annuals were superb. I have them both in a box somewhere, it was an exciting part of Christmas to get them!

As it happens, I've got another Zed on the way, as I was missing mine

As long as this new one isn't a rarity, too, I'll probably apply any mods to it instead of my Issue 1.

Sounds good, the only thing I'd do to this one is to install the CCB module inside the modulator to make it usable.

^ Agreed. Unless something is a collector-quality example then I believe usability comes before collectability

It all revolves around what I find when I undo the case of the new one - If it's tidy ROM and traces, it'll be all systems go.

There are many variations of ZX81 boards.

There were (as far as we know) only two board (PCB) issues that were manufactured for the European market: issue 1 and issue 3. Issue 1 boards generally have a green solder resist layer on the bottom. Issue 3 boards generally have a red solder resist layer, however early issue 3 boards use a green solder mask. There may be other variations as the colours were not important to Sinclair or the company that actually made the computers.

In order to try to keep costs low, Sinclair used various supplies of compatible or equivalent components. You will see various brands of Z80 CPUs for example.

ULAs
There are three ULA chips, two types are common.
The earlier 2C158E type have a four digit date code on the top (eg 8111 meaning year 81, week 11), the type number is on the bottom, but these ULAs are normally soldered directly to the board.
The most common type is the 2C184E. These have the type number on top and are often in a socket. Both this ULA and the earlier 2C158E ULA generate a TV picture which lacks the “back porch” part of the video signal. This causes many colour TV's to show a very dark image with white parts shown as dark grey.
The best and last ULA version is the 2C210E. This ULA does generate the “back porch” part of the video signal, and so is the most compatible with colour TVs.

ROMs and EPROMs.
Although Sinclair used a number of manufacturers for the mask ROM, and sometimes used EPROM chips, there are only three different versions of the code.

The first (“old” ROM) (some mask ROM chips have the number ‘550’ in the part/type number of the ROM) code has a significant bug in the mathematical section of the code (the so called SQR problem, which is actually a mathematical error). So Sinclair modified ZX81s that were still being made / had been made using mask ROMs that had the faulty code. These ZX81s were fitted with a small daughter board containing two 74 series LS TTL chips. This board fits on the Z80 CPU and effectively changes one byte of the ROM code so reducing the impact of the bug.

The second version of the code (the “improved” or “new” ROM) (some ROM chips have the number ‘622’ in the part/type number of the ROM) corrects this bug. However, the mathematical routines are still not as accurate as they could be. It appears that there was still another bug in this ROM.

So a third version of the code was released (based on the “improved” or “new” ROM) (some ROM chips have the number ‘649’ in the part/type number of the ROM). But Sinclair does not appear to have announced this. A minor code change was made.

For the topic where there is some discussion on the last two ROMs, visit here


Dating a board
For most of the production of ZX81s, Sinclair did not use serial numbers.
The best way to date a Zeddy is to compare the date codes on the chips and the modulator. If the modulator has not been changed, this is the best source for the date.

So just keep in mind that what makes your first Zeddy rare is the components used and the extra board that "fixes" the buggy ROM code. Issue one ZX81s are common.

Good luck with you new purchase

but unfortunately the membrane is knackered

(yes I know where I can get replacements

As an aside, a while back I found a picture of an Issue 1 board, with component positions as per issue 1 locations, but without the hand-routed trace layout: 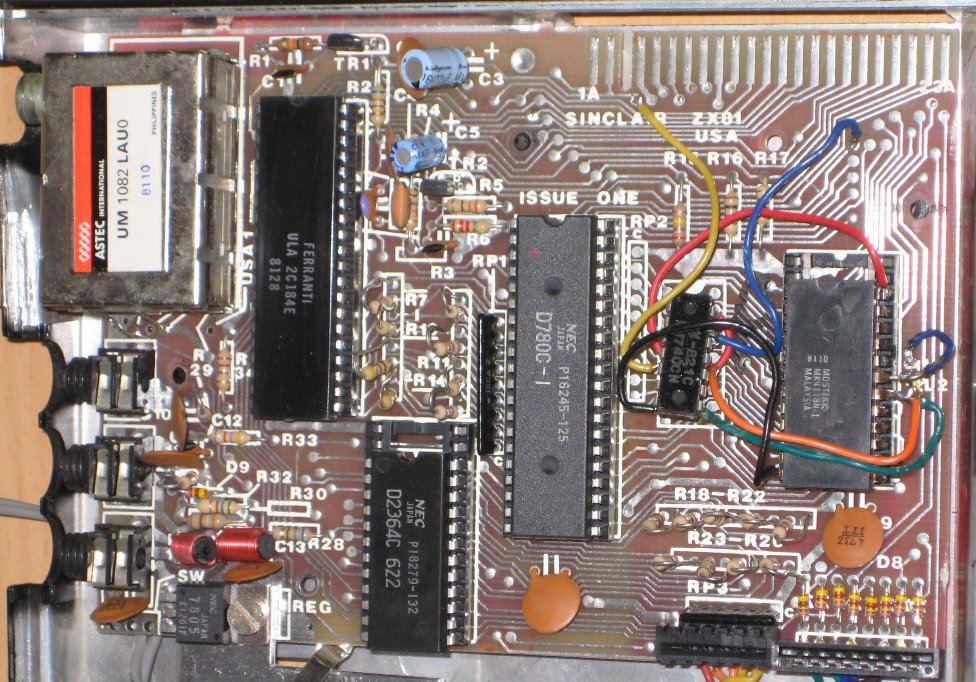 Perhaps this is the reason there's no issue 2?

And as for solder resist colours, I think most, if not all, of the various ZX81's I have lurking around (nearly 10, I think) have them the opposite way round...
Top
Post Reply
35 posts