looking for someone in London to help me troubleshoot a ZX81

looking for someone in London to help me troubleshoot a ZX81

I have just retrieved my old ZX81, which hasn't worked in years, and am wondering what it would take to get it working again. (We've just started a Code Club at my sons' school, and I'm thinking about bringing in the Sinclair as a curio at some point.)

Is there anyone in the London area who might be willing to spend an hour or so with me trying to revive it?

I am not located in Londen nor in UK but we did help a lot of people here via the board.
So what are your personal skills in electronics and what kind of equipment do you have ?
And what does the ZX81 do - or nothing at all ?

Thanks for your quick reply Karl!

I've not been able to test it recently as I don't have the connectors, or a TV. I don't have any notes from my previous attempts to look into this (probably c. 25 years back).

If the board might be able to help me with remote trouble-shooting, I'll need to set up a video output. Do you know whether I can output to my laptop's monitor with a suitable adaptor?

As to my electronics skills, I have a novice's experience with the DMM and soldering iron.

An old TV would be the best to test - where you can manually adjust the channels.
Newer TVs do not often provide a valid picture with the old Zeddy.
Anyway - the picture quality is not very fine and you might have to adjust the brightness full to see the cursor (a white "K" on a black background) at all.

There are several video mods to provide a better quality picture to newer TV or anything accepting a composite video signal (like from a camcorder) - but this should be maybe a second step and first check if the patient is somewhat dead or alive.

As you do not have further measuring equipment I would propose to check if some of your friends have such an old TV somewhere in the basement.

The picture is presented on channel 36 of a TV.
And you can measure the 5V voltage internal at the points shown in the picture. This is by the way one of the available video mods.
Just check if at the board where the red and black cable is soldered the voltage is shown as 5V (+/- 5%) with red cable as plus.
And you can check the heatsink, it will get quite warm when running - this is normal.

For this you only have to open the back cover and the sensitive keyboard membrane will not be damaged when just opening the back cover.
If you remove the complete board you should be careful as the membrane maybe damaged. After 30 years it is likely fragile. 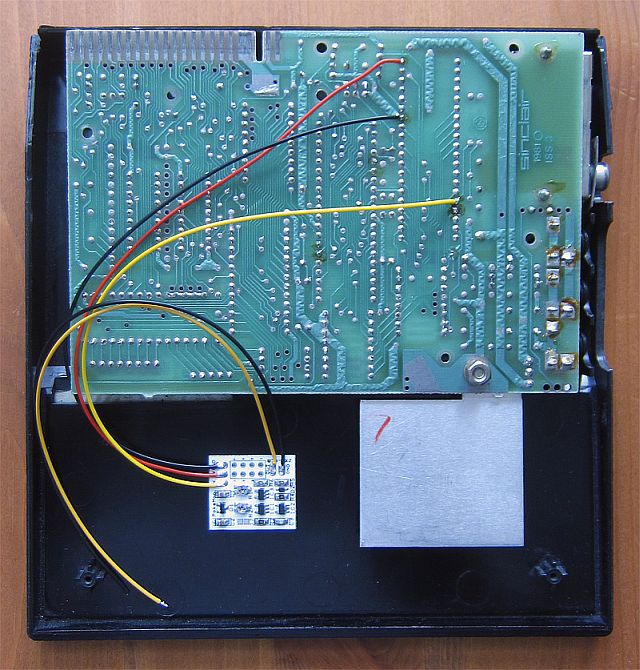 I've got a power supply, and have opened up the ZX81, to test the voltage across the points shown in your photo. I find 4.98 - 4.99 volts, which surprised me almost as much as Voyager's continuing to transmit. I also find that the heatsink heats up when the ZX is left plugged in.

Just to confirm: the leads shown in your photo, and the small board to which they connect (below the membrane) is part of the video mod rather than the original ZX81? (I ask as my ZX doesn't have them.)

Are there any further tests that I can perform without the monitor? Relatedly, are there any ways of outputting from the ZX's TV jack to my laptop as an input? (It would be nice not to need to hunt down an old TV.)

The picture shows a video mod ZX8-CCB which provides a good quality composite video signal and is not part of the ZX81 itself.
It can be easily mounted and a video connector RCA/chinch on the two other cables to connect to modern TVs.
You can get this board form sellmyretro.com here:
http://www.sellmyretro.com/offer/details/3658

You can hope that the ZX81 is working ordinary and use this video mod but if it's not working you have to continue investigations on it.
So up to you. It may work if you are lucky.

C_Rowat wrote:I've got a power supply, and have opened up the ZX81, to test the voltage across the points shown in your photo. I find 4.98 - 4.99 volts, which surprised me almost as much as Voyager's continuing to transmit. I also find that the heatsink heats up when the ZX is left plugged in.

That shows that the 7805 voltage regulator is working and that most, if not all of the circuitry is drawing power from the 7805 regulator chip.

C_Rowat wrote:Just to confirm: the leads shown in your photo, and the small board to which they connect (below the membrane) is part of the video mod rather than the original ZX81? (I ask as my ZX doesn't have them.)

No, your ZX81 will not have them. The wires and the extra small board that you are referring to are a product that Karl (PokeMon) sells/sold. I'll let him explain...

C_Rowat wrote:Are there any further tests that I can perform without the monitor? Relatedly, are there any ways of outputting from the ZX's TV jack to my laptop as an input? (It would be nice not to need to hunt down an old TV.)

There are further tests you can do. Apart from a multimeter, do you have any other test equipment (like a logic probe or an oscilloscope)?
A standard unmodified ZX81 transmits a TV like signal in the UHF frequency band. Apart from analogue TVs and TVs with analogue tuners, the only other devices that can receive such a signal is TV capture/TV receiving/tuning card or similar external USB device for computers. These either are cards that fit in a desktop or tower PC, or devices that connect via USB to a computer that has a good (fast) enough processor. But again you need the type that has a UHF analogue tuner. It would be a lot cheaper to go to a second hand shop / charity shop / old style TV repair / dealer shop and pick up an old CRT type TV. In the town where I live, an old CRT TV can be had for around £20-£30.

Alternately, it is possible to build a circuit so that the ZX81 can produce a composite TV signal. This connects to either the phono type socket (often marked or coloured yellow) composite video input on a TV (or TV capture card/USB device) or via a SCART input. A old CRT monitor that can accept a 625 line 50Hz video picture (as used in the TV industry, or in the CCTV industry) should also work. Most (as in nearly all) computer monitors that are of the VGA (or better) will not work.

More in a bit

Because the Z80 and everything connected to it works at a high frequency, there is only a limited amount of testing you can do with just a multimeter.

Test the TV/TAPE pin on the ULA, pin 16 and report back the voltage you get.

I can't think of any other useful tests, unless you happen to have the exact same multimeter as me, or someone else on the forum (so we could do a comparison reading). There is no point in me giving you any examples, as different meters give slightly different results on chip pins that have fast moving logic signals on them.

Here's something from another life 30 years ago... connect the MIC socket of the ZX81 to something that will let you hear the output, e.g. connect it to the 3.5mm input of one of those wireless speakers people use with their phones these days. When you plug in the ZX81, you might start hearing a low buzz. After a few seconds (while it's hopefully checking RAM and then displaying the K cursor), carefully press shift and F (to type FAST) and then press NEWLINE. Now press NEWLINE a few more times - the buzz should momentarily cease each time you press it, just as the display to a TV would cease at the same point due to being in FAST mode.

If you can get thus far, that's a good sign of the ZX81 basically working, assuming you can get a video image to view.

Believe it or not, age 12 - when I didn't always get to use the kitchen TV - I could actually enter whole programs like this. I was able to recognize the sound of the delay when it was displaying the S error symbol, and press EDIT and then NEWLINE to abandon entering the bad line and have another go. A successfully entered line had a similar characteristic sound. Each key press gave a tiny 'click' of silence in the buzz, so I could tell whether it had registered or not.

By the time my mum had finished with the TV, I'd have a whole listing entered and I'd be ready to carry on!

EDIT: I should mention that the above is a lot easier to do if you have the 16K attached, as the screen redraws are slightly longer and easier to hear.
Top

Yes - you could maybe connect a PC soundcard MIC input to the MIC output of ZX81.
Don't wonder - Sinclair named it from view of the devices to connect to and not the corresponding signal carrying out. MIC on ZX81 is a output.
So after startup you maybe can hear that noise described (very low) and press S for SAVE, SHIFT-P, P, SHIFT-P (will give this on screen SAVE "P") and then NEWLINE. This will give a 5 seconds silent, a few seconds terrible noise, then the low background noise from power-on again.

By the way - this test will only show, that the ZX81 is working in general but it's not a test if it is giving out a picture. It may work but anyway could be a broken ULA. But this will help to see if it's working. Try to use the original or mono audio cables. Not sure if it will work with newer stereo cables. You can use Audacity for example to record from your PC via soundcard / MIC input.
Top
Post Reply
23 posts