Ok this CZ1500 is a rebranded argentinian TS1500 runing at 50Hz.. .
I've found at least 2 variants in the 1500 main board and at least three variants in RF modulator.. this I have doesn't have any component attached directly to the board inside the modulator box. In fact the modulator has its own metal floor and a board soldered inside.
First attempts trying to preserve the modulator cage and use the "original" connector failed due to some kind ok a coil soldered underneath the output pin that prevented it to work. So if you want to keep the esthetics you need to carefully desolder the modulator from the board and then desolder the tiny board inside, that is hardly soldered from the bottom ...

As I couldn't find any schematics for this board I followed ULA pin53 and marked in the picture were you could take the signal before it is splitted to the mic output.. as I wanted to use the modulator's box I re positioned the wire near the corner to the hole marked in the second picture.. middle wire brings 5v supply.. and the first wire I just kept it cutted... (this computer doesn't have a channel selector as the TS/CZ1000 so I don't know what does that third wire do) (originally it sintonizes to cannel 2).

Thumb up! You are welcomed!
Top

I found a website on a printed circuit board based on your video transistor buffer amplifier circuit design!

I found a website on a printed circuit board based on your video transistor buffer amplifier circuit design!

It still has Mark's signature on the diagram 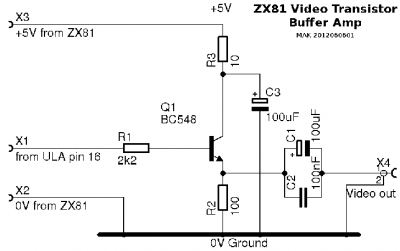 It would be nice to give credit for other peoples works at least. I know of one person (who I shan't give any publicity to) who has ripped off the ZXpand design though I have yet to see them being offered for sale.

It looks like miss-attribution rather than no attribution.
The person received the Gerber files from Klaudiusz Fatla and attributes the design to him with a thank you.

Likely the correct attribution got lost in the handoffs.

It would be kind to let them know of the error as they seem to want to give credit correctly.
Top
Post Reply
8 posts • Page 1 of 1