That looks interesting - and quite simple too.

I've just ordered an ESP32 - should arrive at the weekend. In the meantime I'll read and re-read the instructions!

Thanks for the tip - I'll let you know how it goes!

That's neat, but looks like it would work similarly to the TZXduino in the way it interfaces to the ear port. I think you said you were having problem with loading from that into the Minstrel?

I got the best results with my bodged together TZXduino with all of the analogue circuitry on the output missing, and just feeding the output of the Arduino directly into the ear port of the Minstrel.
http://blog.tynemouthsoftware.co.uk/201 ... pdate.html

I have tried lots of different front ends for the Minstrels, with different sort of buffer amplifiers, and still have the same sort of patchy results from old tapes as I get with a real ZX81. Next on my list of things to try is something based around a comparator, a bit like the input stage on the Harlequin ZX Spectrum clone. I don't know if anyone can suggest a better input stage for the cassette input?

Have you seen the Improving Timex/Sinclair Tape Loading topic?

A couple of the problems with the ZX81 is that (1) the analogue input (mic) circuitry attenuates the signal by quite a lot and (2) the ULA input has no hysteresis, so any noise or an uneven signal level can cause loading difficulties.

And of course, circuits like the ZX80, because they use 74LS series logic, need an input signal that has a high enough voltage. Which old tape decks could manage, but most modern audio gear can’t (at least, not on the headphone or line output sockets).

tynemouthsoftware wrote: ↑Tue Nov 10, 2020 11:09 pm I got the best results with my bodged together TZXduino with all of the analogue circuitry on the output missing, and just feeding the output of the Arduino directly into the ear port of the Minstrel.
http://blog.tynemouthsoftware.co.uk/201 ... pdate.html

"That's neat, but looks like it would work similarly to the TZXduino in the way it interfaces to the ear port. I think you said you were having problem with loading from that into the Minstrel?"

I was thinking about this last night and came to the same conclusion so I'm not sure it's going to work, but in an effort to get the minstrel to be something usable I'm game to give it a try.

I also tried old school yesterday - my old Sony mono cassette player (was still in it's box no less!) and a new TDK C60. Created a '10 Print "Hello"' prog, saved it (saved fine), but it wouldn't reload. Loading attempts resulted in regular wavy lines - the waiting pattern - until it got the initial burst of a signal, then the wavy lines went static and nothing more. I watched the tape counter go way past the end of the file on tape. I spent half an hour trying different volumes, same result every time. At that point I gave up.
Top

Are you sure the Minstrel is OK? could be a short or a dry joint one one of the pins, wrong values (particularly easy with the 47nF/47pF caps), or a flaky 74HC257.

Saving and reloading works on all the Minstrels I have built, as does direct from TZXduino, so I may be worth double checking your build.
Top

I'm as sure as I can be that it's working ok; it's functioning as as ZX81 in all other respects - just the loading issue.

There are no obvious shorts (under a magnifying glass); The 257's will be my next line of attack; they're the only ones where I couldn't get TI chips (I prefer to stick to one brand) - these are badged ST Malaysia; I know this shouldn't matter but I'll dig a bit harder to get TIs and replace them all.

I struggled with this issue as well when I build my Minstrel.

If you have a oscilloscope you also may connect both inputs of a logic gate of 74HC32 to pin 14 of IC25 and check input wave at ear jack and output of the 74HC32.
So you are able to test when the HC logic is triggered.

One other possible solution to the loading signal problem where 74HCxxx chips are used, is to use two transistors as a level converter. With the last transistor that feeds the 74HCxxx chip being configured as a common emitter, with a collector resistor of say between 680Ω and 1kΩ. That arrangement should have no problem pushing the input voltage to the 74HCxxx chip higher than 3.5V.

However the gain of the circuit would have to be controlled, otherwise noise would overwhelm the input.

Swapping IC25 HC257 for an HCT257 should not cause a problem if that works out better. I would suggest changing IC24 as well, so the keyboard response is identical. The other inputs are near by HC outputs so HCT should be OK.

One of the very last revisions optimised out several gates and reduced the chip count by two. One thing that was removed was an inverting transistor buffer on the ear input, and a corresponding inverting logic gate to return it to the correct polarity. 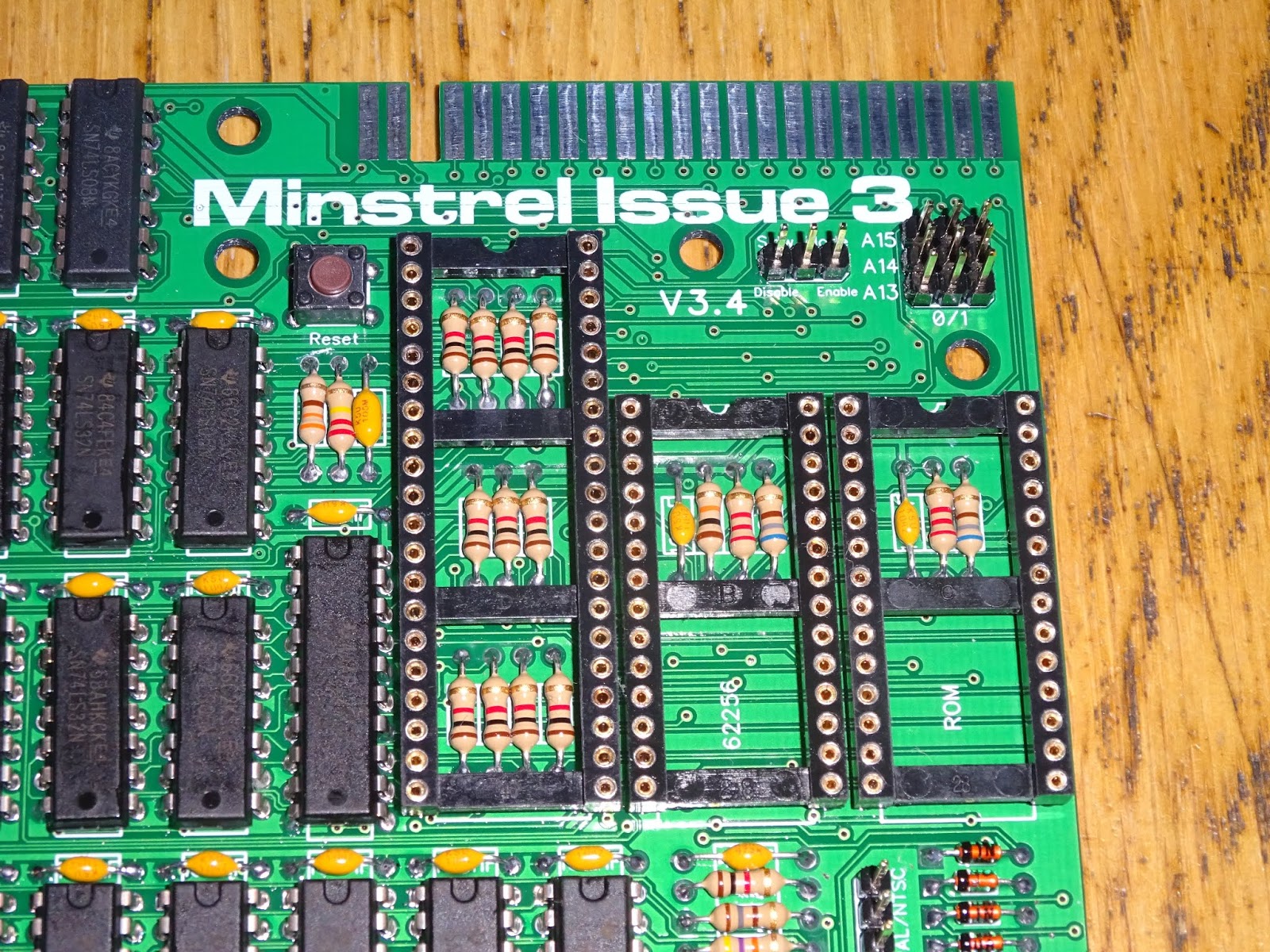 The extra stages did not seem to make things any better, at least on my test setup, and going back to the simpler input stage (as used on the ZX81) did not make things any worse.

I would like to improve the input stages for the next revision of the Minstrel 3, but so far none of the designs I have tried have been significantly better than the simplest version to warrant the changes.

I went through various other ideas for the Minstrel 4th, but in that case the loading problems were down to the files I was trying to load rather than the input stage(s).
http://blog.tynemouthsoftware.co.uk/202 ... r-ace.html