So - as announced previously there will be a ZX80CORE follow-up. It's got a new name ZXmore.
It is unfortunately not available at end of this year as planned but nearly finished and should be available from end of january (boards and kits).
First I planned only a few new features like some more memory and an eletronic bank switch for the ROMs but it got more and more and is not any more fixed on ZX80 or ZX81 but still compatible to these two computers.

But I wanted to have an additional support of Z80 computers and decided to realize a CP/M support as well. The main difference is that ZX80/81 has ROM at the bottom and RAM at the top while CP/M has it vice versa. So I needed a flexible memory layout and found a great solution which allows even to start a ZX spectrum 48k on it with restrictions like monochrome display and missing audio support. But I planned to realize an additional slot module for the extension connector to realize this later in 2015 to make the ZXmore to a full compatible 48k ZX Spectrum with color and audio.

It has also quite more memory (512k RAM and 512k ROM) divided into 8 images and can be switched either mechanical with the switch or electrical as well via software. So you have 64k RAM and ROM for every instance which can be diveded different for instance. This is a bit waste of memory (50%) but makes it more easy to realize technically. So later on I will provide an additional control image to change the default memory layout (ZX80/81 compatible) for use with CP/M and to control different additional features and start up to seven instances with different or maybe same configurations and task switching. Finally ZXmore will be able to offer a multitasking feature allowing to execute 2 or more instances at the same time while toggling the display / keyboard control with a simple key press.

So this will be a funny project which will accompany me and maybe you in the next year as it will have the ZX80CORE functionality in the beginning phase and allow the CP/M and multitasking options approx. in april next year through software/rom. In the summer the availability of the ZX Spectrum addon card is planned to turn the system into a full 48k ZX Spectrum with RGB/VGA output and audio.

I planned to finish the development in decembre this year but as you could imagine the whole feature list did require some time to finish. The main system is ready now with nearly all features but some changes are needed to put some logic into a (small) CPLD and to realize the USB interface to load and save data from an attached USB stick which offers additional functions for the CP/M (BDOS). I am now a bit unsure about a joystick support but maybe it is better to pack this on the Spectrum interface as this was not part of the original ZX81 development and there is no really joystick support other than simulating keypresses - different for many games. So maybe not as useful as somebody mind think first.

It is now my plan to have the boards and assembly kits in end of january. The form factor keeps the same as the ZX80CORE so it is still possible to put the whole board into the same acrylic case. There maybe a different layout at the backside which is not compatible to an original ZX80 case due to connector placements but whoever has theses cases at home ? The keyboard layouts can be individually changed to either the original high-glossy-ZX80 keyboard with or without smd tactile switches or with the ZX81 selfprinted layout together with the switches up to personal preferences. There will be also a hotkey feature to display the keyboard layout easily on screen with the control images which makes it easier to change or find the right key with the desired keyword. It is also planned to use additional the greater ZX spectrum keyboard together with the ZX Spectrum feature but maybe not many people are really programming on the ZXmore rather than starting some games on it.

The board/kits may not be much more expencive than the ZX80CORE but offer much more features.


Here some pictures from the prototype: 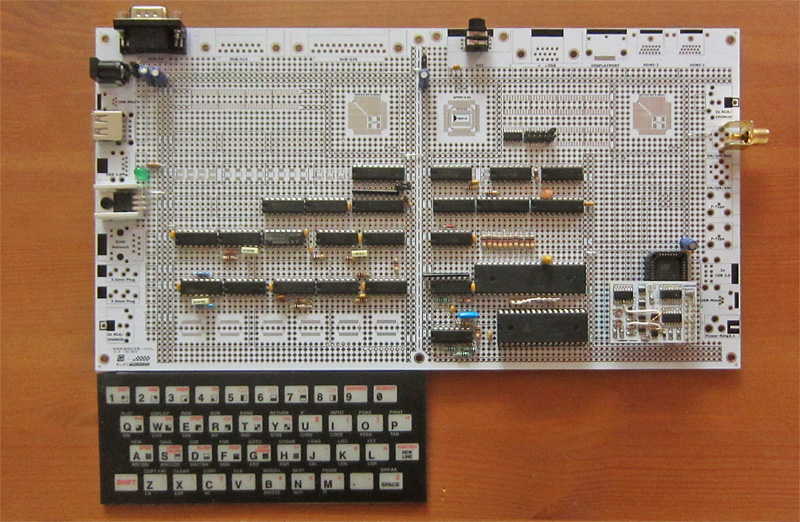 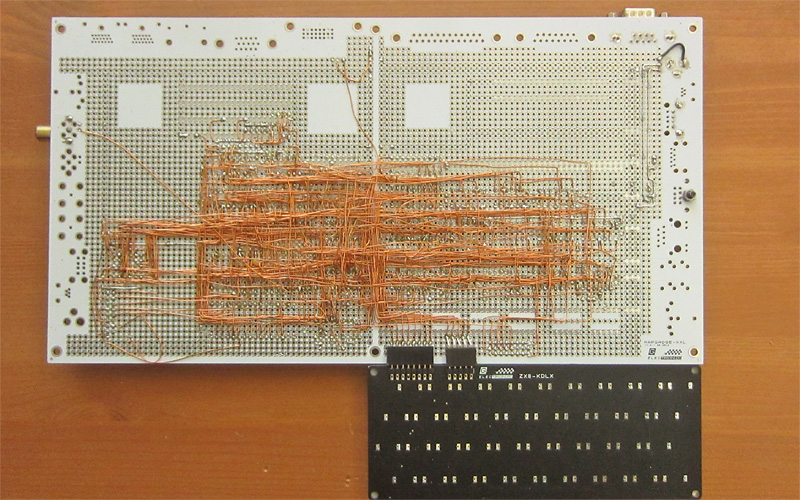 I can see what will be keeping me busy in 2015..! This sounds amazing Karl!

That is a very comprehensive and useful looking prototyping board also.. is it of your own design?

It has several features as power supply lanes through IC legs, support of direct SMD parts like SOIC, TSSOP28, SOT23, DCT, QFP32-64, QFP80 and many connectors who may ever use like USB 2.0, USB 3.0, USB Mini, RJ45, Chinch and 3.5mm jacks, DSUB 9/15/25, VGA, Displayport, HDMI, DVI and some analog connectors as well. The board maybe devided into two pieces from the middle using a cutting tool. So just some basic data.

I could sell these for about GBP 25.00 - in case anybody might be interested in realizing a big project just write a message to me.
Top

I look forward to hearing more

REALLY nice! Looking forward to more specs.
Q: is the 6.5MHz mode possible to control by program, so it would be possible to make a VGA-compatible 256 pixel driver, or a 512 pixel composite video driver? Or is the video not software controlled? Maybe the CP/M mode has some other type of video driver (chip)?
/Adam
Top

nollkolltroll wrote: Q: is the 6.5MHz mode possible to control by program, so it would be possible to make a VGA-compatible 256 pixel driver, or a 512 pixel composite video driver? Or is the video not software controlled? Maybe the CP/M mode has some other type of video driver (chip)?

Yes and no. It is possible to control by program but it is automatically switched to slow mode during video execution when executing a HALT instruction what is used during synchronisation. There maybe the chance to write an own display driver which can circumvent this and allow faster execution but I am unsure if this would help in that way because the video latch is still clocked with 6.5 MHz given maximum 416 pixel in a horizontal line including the non visible areas.

It may be possible to change the sync timing but I am unsure if this makes sense as a VGA resoultion of 640 x 480 pixel wouldn't let much time to let the system enough time for useful program execution. This may be a nice idea but the more I think of it there more problems I find. So this is an option for the spectrum cartridge (maybe) - not that useful for the main board, I think.

But you may try - it is possible to write own video drivers with own ISRs as well which can be executed in RAM (at least the ISR at $0038 - not 100% sure for the NMI). So maybe it is possible - maybe not.
Top

So development is finished, finally. Unfortunately I didn't had too much time in beginning of this year but the last step (putting as much logic as possible in a small CPLD) is done. I will give some more detailed specification in the next week.

So the price for the boards will be around 24 GBP including the Altera CPLD (MAX3000) and a FTDI VNC2 for USB interface. Additionally you need standard chips and parts for around the same (GBP 24 I think) and a ZX80 keyboard membrane. Anyway there are different keyboard layouts which can be hold compatible with some patching in the keyboard tables in the ROMs and it won't be suitable to change the keyboard for every application / operating system. And the control image will provide a hotkey with visual keyboard on screen - so it won't be that hard to have just one keyboard. And I don't think you will program fulltime on this system.

It will fit into a ZX80 case or at least the acrylic case from the ZX80CORE depending on the connectors at the back. The board will be capable of running ZX80, ZX81, ZX Spectrum (monochrome only) and CP/M in several instances and at least concurrently as well. I will provide a separate cartridge over the expansion connector for full ZX Spectrum functionality (48k) with audio and color video later this year (summer).

So this was really a fun project, would be nice to get some boards out there for you at home.

Here are some impressions of the final step, integrating the CPLD into the system, see the black wires. Looks crazy but works fine. 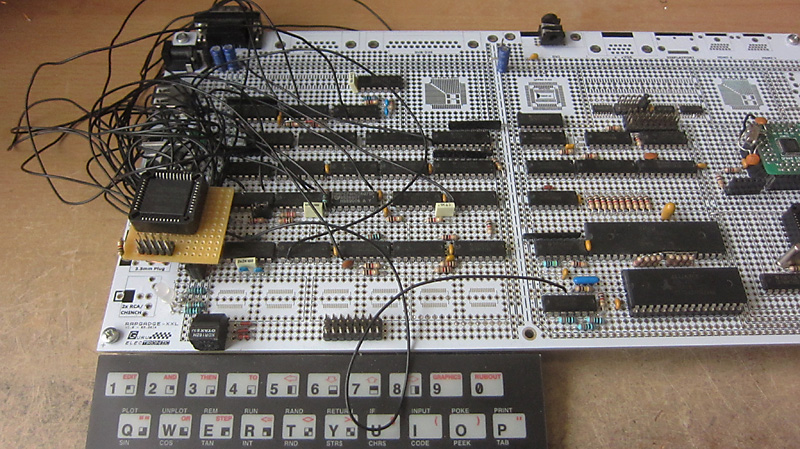 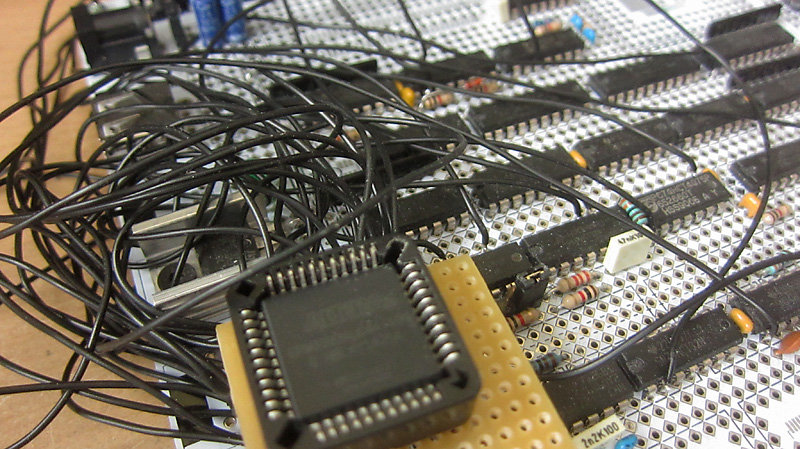 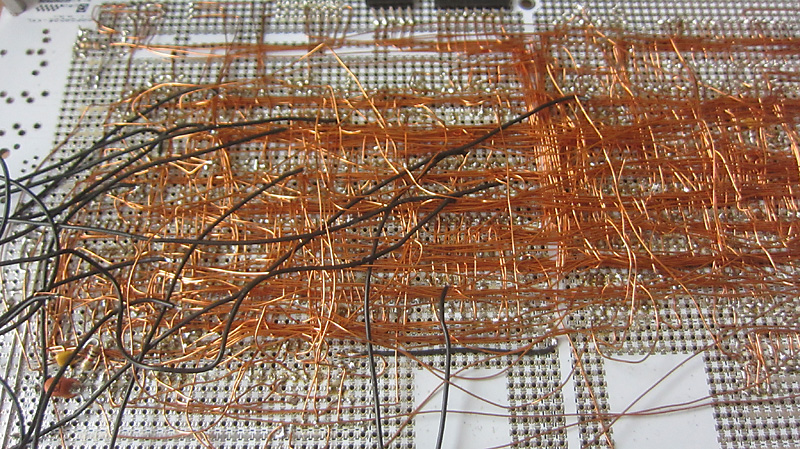 Karl you are a certified crazy madman genius

Count me in for a board

Karl, is that last picture part of a Infinite Improbability Drive

I hope you got most of the connections right first time, as it looks like a miscounted connection would be *fun* to fault find

I can't wait to see the production board