Hi there,
I want to announce a new project which is near production. Me and some other people on the german forum wanted to have their own ZX80 board. After several discussions we decided to produce a modern board, which looks like ZX80 but supports some new memory ICs and some new features. And the goal was to have CAD data manufactured board with stop mask and silk print which Grant Searles data does not support.

So optical it is nearly identical to the ZX80 board. It will be produced with white stop mask and black silk print which looks really nice and more high-end like an example in this picture:

So the board completely fits into the original ZX80 case (mounting holes, dimensions, connector placement, height of board/components).
Following add-on's or modifications are done:


ZX80 connector, pin 23b => /ROMCS is wired to this pin and /ROMCS is connected internal via a resistor
so /ROMCS can be overdriven by external components like ROM attachements or similar - this is optional via a jumper (pin can be left empty like in original)
- so external modules like RAM extensions, printer and so on can be used with it (depending on drivers, ROM version, for more read further)

keyboard - here the original ZX80 keyboard foil can be used as well as smd tactile switches, very small have found them with only 1.5mm height (0.06 inches)
see picture below: 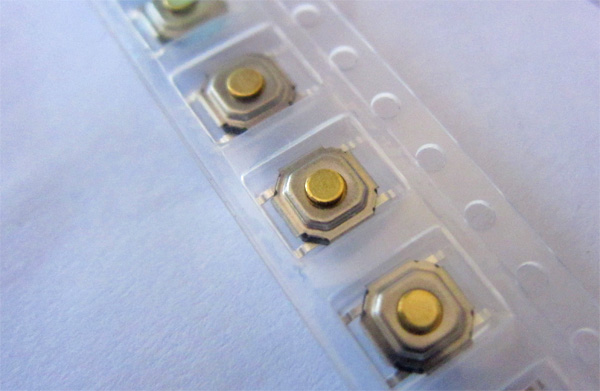 After I do a first prototype (industrial produced but single board) to eliminate eventually bugs on the board to have at last a bug-free board.
I think this is necessary due to it's complexity (about 100 components, not including tactile switches if used, 700 single pins or pads and more than 500 nets) and I think everybody would be more interested with a board not seen any cables, cuttings and so on.

Approximately in end of june 2013 the board would be available for delivery in a second batch with more boards.

So please let me know what you think.
Top

Here the latest version (has yet to be proved).

Of course I will take one

Of course I will take one

Now, now sirmorris, calm down. Do you want one or two

I would take one. (if there is one left of course)

Yes I think we have reached this level of EUR 25.00 for that board (minimum 10 boards / customers).
And of course I can and will order more boards as well.
So anybody interested can post here that we can count and I will do some spare boards as well on my own for some late birds.

Maybe I can calculate some discount for the second board (who wants a second) - but wouldn't be much, a few EUR or free shipment - something like that.

1024MAK wrote:Now, now sirmorris, calm down. Do you want one or two

I think Charly was so excited that he double hit the keyboard.

1024MAK wrote:Now, now sirmorris, calm down. Do you want one or two

I think Charly was so excited that he double hit the keyboard.

So that's how SirMorris managed to have more than 1500 posts.

In theory, there is no difference between theory and practice. But, in practice, there is.
Top