Excellent work once again, Johan I'm really enjoying this one!

This project was a winning entry for the http://www.reddit.com/r/retrobattlestations 4th annual BASIC month contest. It is a modification and enhancement of an original Apple II Lunar Lander demonstration that was posted in the reddit forum early this month. I thought you guys might be interested in the project. Here is the official description from the reddit.com web site:

This is my entry for the r/retrobattlestations BASIC Month 4 contest. It has been converted to a fully interactive game with a demo/attract mode. I went a little overboard on it, but it was a labor of love. I always wanted to be an astronaut when I was growing up, and the Timex Sinclair 1000 was my first computer that I ever owned. This project was a match made in the heavens!!

When I saw /u/FozzTexx's Apple II program, I immediately thought that it would be perfect for the Sinclair ZX-81/Timex Sinclair 1000's character graphics. The question would be if it would be fast enough to run the code well enough. Judicious use of the FAST mode (which turns off the screen) and reducing the sprite and background resolution made it work. It's still a bit sluggish with the additional game code, but it works enough to play and is quite fun. I found it to be quite addictive.

Real quotes from the Apollo moon landings and a simluated Apollo Guidance Computer display make you feel like you are really there!

Finish the tour of duty and retire with a pension!

There are not so hidden ways to "hack" into the system to find a "practice mode" with a flat surface, and the ability to select the misison of your choosing. Finding how to access these easter eggs is left as an exercise for the reader. (HINT: Look at the code!)

There will be 60 seconds of blank screen at the beginning of the game to build the lunar surface. Please do not be alarmed by it.

Controls are quite sluggish. You will have to hold the keys down or press them a few times to register. The Sinclair ZX-81/Timex Sinclair 1000 does not have a keyboard buffer

Don't overdo it on the sideways thrust. One burst will adjust your speed a good chunk, and it takes some time to see a difference in the lander trajectory. If you hold down the key for a long time, you will overshoot your target. You can see a burst of flame from the side when the sidways thrust burn registers. One or two burns are often all you need! Just a little dab will do ya!!

Use your guidance computer (The "A" key) often. It tells you everything you need to know to land safely.

Keep your landing velocity under 1.5 in each direction and watch your fuel!!

Whether playing on a real computer, online, or on a standalone emulator, post your scores and rankings here for ultimate bragging rights!!!

Let me know of any bugs or issues! 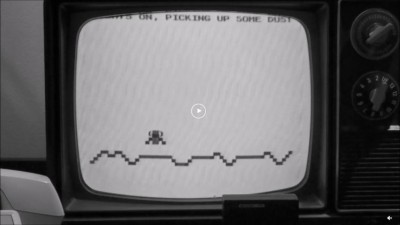 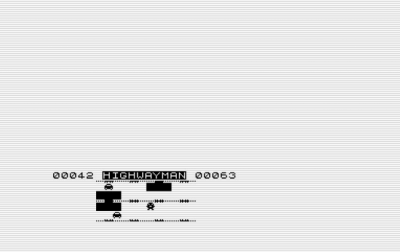 Description:
Repair the lights on the road while traffic is passing by

Description:
Play this highlandgame, kilt is not obliged. 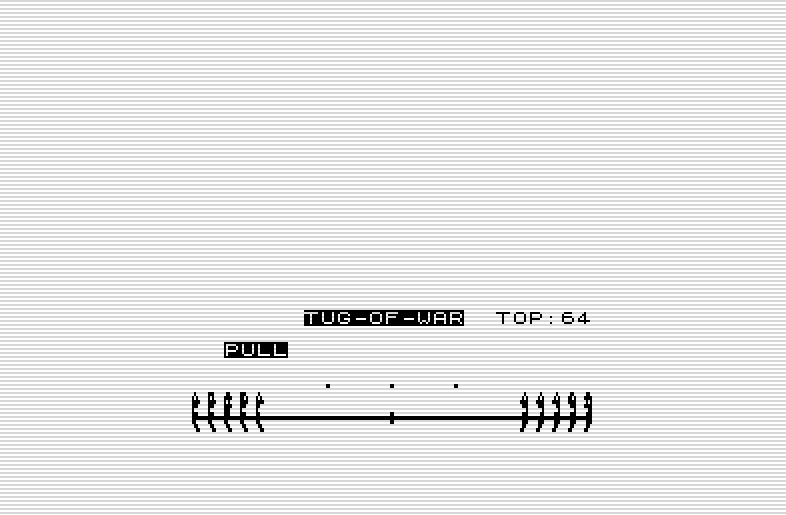 Tug of war
Tug of war is a single key game where your team wants to become worldchampion.
You have made it to the top 64. In this tournament the winner will make it to
the next round. Each round the contestor gets better.

The only way to win is to react on the commands given by the teamcaptain.
Only when you fail (and the opponent reacts right) you will lose some grip.
DO NOT PULL WHEN THE COACH DOESN'T CALLS TO!

Each round you need to react quicker and the opponent will do the same.
After winning a round you will see a few seconds the winningscreen before
you go to the next round. The game ends when you lose or when you hav become
the best of the world.

Controls:
Newline : Start new game
All keys but H-Newline: Pull on the rope. 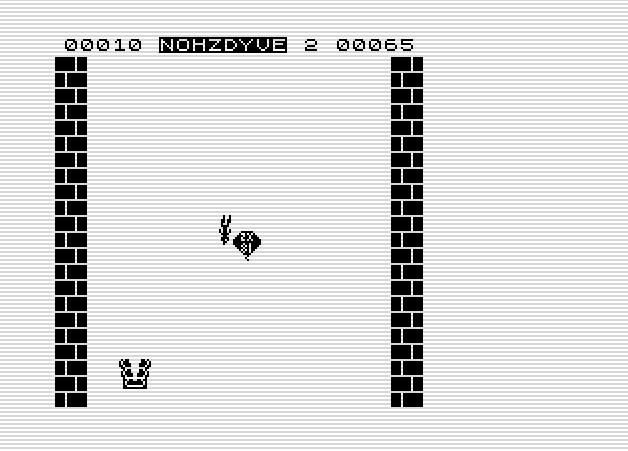 This "classic" game from an alternate timeline needed a 1K hires version.
Without the walls it would be easy. I could use the routine from "Stupid Cupid".
But the game adds the dropping effect when the wall goes up, so the wall was needed.

The routine from "Stupid Cupid" was base for this routine, but it had to be altered to
built a stonebrick wall. This is done by 2 fixed lines of display. 1 line
with small brick/large brick and 1 line large brick/small brick. The morterlayer between
the bricks is set by NOT displaying the current bricklayer. Synchronizing the display was
then a tough job, but I managed. Each displayline must have the displayed graphic cleared.
This is easy on the 2nd line. Each graphic has 1 line of 0. However.... the display
uses 2 different lines (2 bricklines) and the first line is NOT cleared. I managed to clear the
display of the player. The clearance of the large graphics is solved by displaying a space
on the next lines on the same x-position. This worked for the display of the character.

Movement:
On the original game the movement is pixelwise. This is not possible in 1K.
The doublesized graphics move half size, both up and left/right.
Due to this movement and the way the screen is drawn the graphic of the player must
swap up and down to keep a correct display. To keep the display the test on hit
is done each movement but only the final test is done when the display is in
startposition or the next game can't start in the right way.

Memoryuse:
The game has 1 byte left to code.
A 1K game can load 949 bytes. The rest us needed by the loadingprogram and stack.
The game however uses 1023 bytes. This is done by expanding a compressed screen over
the not loadable memory. The program has some time before an intrupt occurs.
During this time the stack can be used to execute some code before the code is
overwritten by an intrupt. The program holds 2 lines of bricks compressed.
On the brickline the decompresscode is stored. A part is stored over the systemvariables.
The program has 2 displaybuffers. Both buffers can be used to store data as long bit 6
and bit 7 are not set. The first buffer holds data of space grpahic and the falling plater.
The second buffer holds a table to move graphics left or right. Instead of -1 (255) or 1
the values 0 and 2 are stored to prevent bit 6 or 7 set. To move a graphic 2 or 0 is added
to the x-position and then decreased by 1 resulting in x+1 or x-1.

Controls:
The controls mimic the original when possible.
Only to start a (new) game Newline is pressed. This could be done
with space but you might start a new game without knowing your score.
Each new live starts with space.
Left and right are O and P.

Left out from the original:
1K is not much. From the start it was obvious that a washline had to give way.
For long I had hoped to add the airco but the game needs the memory.
Animated graphics are left out too although a moving player is possible but left out.

Description:
It's coming to the end of 1921's digging season in Egypt. Your excavations have not gone so well this year, failing to find any trace of the legendary and as yet undiscovered Pharaohs tomb. Then in your final weeks wild stories recounting the wrath of vengeful mummies strangling would be tomb local raiders filter back to base camp.

At last some concrete leads worth looking into, and opportunities to good to pass up. Oculist tales of curses be dammed, you're an Egyptologist and grand adventurer, such nonsense can't possibly hurt you. Or can it?

Tut-Tut is one part puzzle, two parts arcade action. The game is comprised of 28 levels, plus a hidden treasure chamber which may only be opened if you are deemed worthy. 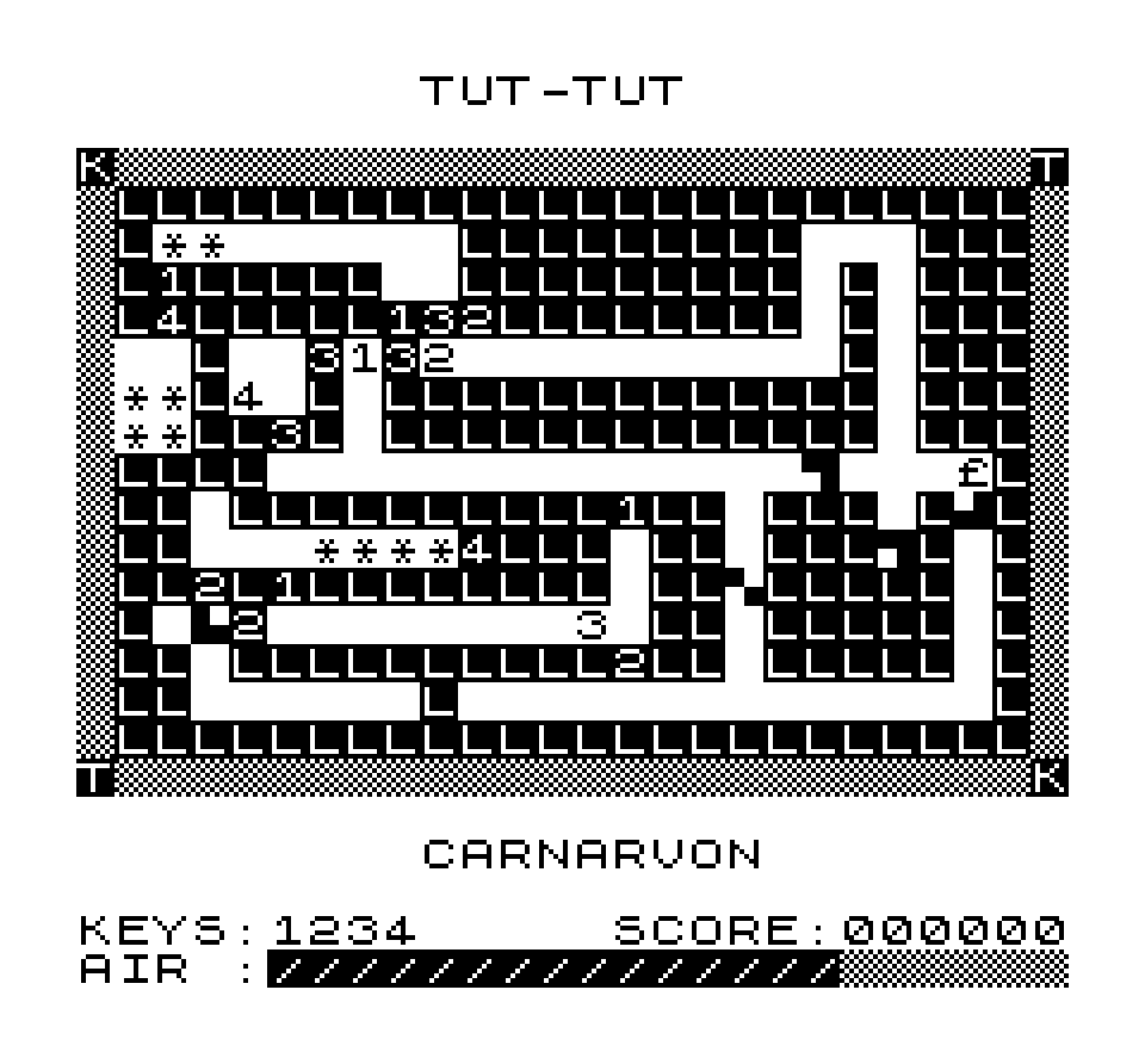 Whilst I'm not the worlds greatest gamer I shall have fun with this, and if you have no objections might have a crack at a UDG version for those of us with UDG boards and for eighty one emulator.

I've put together a simple UDG version and if Dasteph approves will release it.
Top

I'll include your UDG version in the zip file with the original if you're ok with that.
Just Because: ZX81 Keyboard Adventure Blog
Top

With Dastephs kind permission a simple UDG version which thanks to the fact only the graphics chrs were used rather than letters or numbers meant it was fairly quick to do. Perhaps some of the chroma interface lads might want to add a splash of colour too?

As usual with my conversions Xpand owners with Mr Rea's UDG board(set for 128) make sure all three files are in the same folder then load and run the file "TUTREM4.P" it will do the rest.

Eighty One users need to set CHR$ 16 no high res and set for xpand attachment, also all files in the ZXpand card folder.

Have to say an excellent and tricky game whichs requires a bit of logical thought and well worth the effort put into it.

I would add though the lack of a save feature means you have to do it in one hit which is fairly hard and you may find that an external keyboard makes life a lot easier.

I would be honoured if you wish to add the files Dasteph if you feel they add anything to your creation.

The UDGs are a really cool interpretation, I particularly like the amulets and bracelets, makes quite a difference when playing the game