If you haven't enough Space Invader games yes, here's a new one...

Just FYI for everyone, this is now on V1.3 and is near arcade speed with proper colours and sound. Absolutely incredible feat.
Top 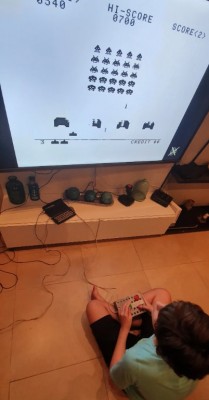 I did some Beta testing on this for the developer. Last version is really playable and I guess 99% accurate with the original.
The "partial chroma" version is playable without a Chroma81 interfase with a wite background as we are used in ZX81. The full Chroma version shows the same color bands as the original arcade and a black background and border but will crash if you don't have the hardware (or the emulator setup as Chroma) .
Sounds are great with real AY hardware but emulators doesn't.. EO sounds a bit glitchy..
Playability is good and is fully compatible with ZXPAND Joystick.
Have in mind that needs 32Kb of RAM WRX compatible so ZXPAND is almost mandatory.
Is the first time I see a WRX Chroma 81 game all together..
Try it from here
There is a Spectrum version too
https://splintergu.itch.io/
Ernesto
ZX80, TK83, CZ1000, CZ1500, TK85, CZ2000, CZ1000Plus, CZ Spectrum, TK90X 16Kb, CZ Spectrum Plus, TS2068, Sinclair QL. TS 1016, TS1040. And more to come

I wish the Retropie version of EightyOne supported 32KB

Not that I'm aware of