Here's my latest game - Tractor Beam. Inspired by the 1981 game Galaga, this game features most of the features found in the arcade game. The aliens can capture one of your fighters using their tractor beam. Shoot the alien that got your fighter when it's attacking, get it back and join two fighters together for double firepower.
There are four difficulty levels (level one if just a trainer - 20 lives and aliens don't shoot). There are three different challenging stages where you can try for bonus points.
Here are some screenshots. I was going to show you the game in dual ship mode, but an alien shot one of my ships before I got a screenshot. 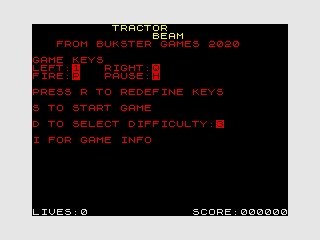 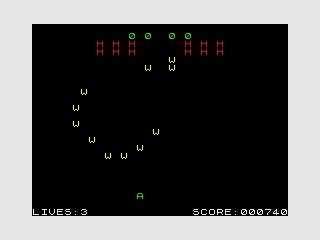 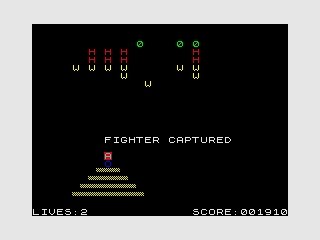 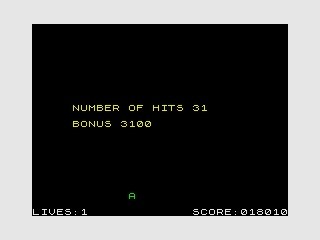 My website also has a Youtube video of some gameplay and a link to and MP3 file if you want to play this game on a real ZX81. The game supports Zonx sound and Chroma colour, but will work with a standard 16k ram pack. The tractor beam aliens need to be hit twice and change colour in the arcade game to indicate having been hit once. In this version, they change from zeroes to an O when they have been hit once. So you can still tell if you've hit them once even without colour.

I'm pretty certain there is no decent version of Galaga for the Spectrum, so this could be yet another game where the ZX81 has it and the Spectrum doesn't.
Top

Thanks for making this game so polished. I love the attention to the details which really show in the gameplay!

I will make an attempt at a UDG version if you have no objections Bukster?
Top

That is really cool!!! Can you tell something about the Making-Process??

Greetings
Jens
eyerything will be okay in the end.
if it´s not okay, it´s not the end.

I will make an attempt at a UDG version if you have no objections Bukster?

No objection. I take it UDG requires a modified ram pack and as I don't have one UDG wouldn't work on my hardware. As the aliens are all single letters, it might translate quite well into UDG
Top

Made using Flat Assembler. It's entirely in machine code and even leaves about 1kb spare so memory efficient. As you can probably guess, the aliens are following preset movement tables. Every alien has a home position. When the assembly movement ends, it homes in on its final position. There is a routine that adjusts the final x,y to make the aliens move left/right or in/out in final formation. There are two alien squadrons that can be on the screen at the same time. The second squadron follows the movement tables in the opposite way on the X axis to the first one. That way I only needed to do one movement table to make the mirror image attacks you can see.

This game could probably be used as a basis for any other game that uses movement tables like Phoenix or Pleiades. I could have added a second status variable to each alien so it could remember status for players one and two if I wanted to make the game two player. So might be worth thinking about for future games.
Top

Many thanks for positive response Bukster.

Firstly let me say what a bloody marvellous piece of work this is.

Key redefine (always welcome)
Difficulty select, non gamers like myself love this as it gives us a chance to see what lies beyond level 1! as opposed to fighting the programmers ego

I played this using an external Memotech keyboard and I'm amazed that the movement and response to input is arcade quality in my opinion.

I have done a UDG version but the unfortunate thing is because the normal letter set has been used it means that the letters used will show as UDG's in the menu etc. so may may spoil the effect for some , otherwise I think it looks ok.

When I do UDG conversions I do them for both the Eighty One and SZ.81 emulators and for real zeddies using the UDG board created by Andy Rea.

Unless you have a spare version of the game knocking around that uses the graphics set rather than the letter set I could convert then seeing as you're happy I'll post my efforts up to press.
Top

I've added a link to the program on my Chroma native colour software web page.
Top

Tremendous piece of work. Since nobody else seems to have actually had a go at the graphics, I've done them. I don't think you could get massively closer than this in 8x8. If someone wants to plug these into the game I'm sure it'd be fabby. Although NB the game's use of 0 for the Boss Galaga somewhat buggers up the score display.

(I'm having trouble getting Chroma to behave because I haven't used it in ages and everything keeps coming out a single colour, or I'd have uploaded a complete game file myself. And yes, I know the sprites below are a messed-up mix of ink and paper, but the design is the thing.) 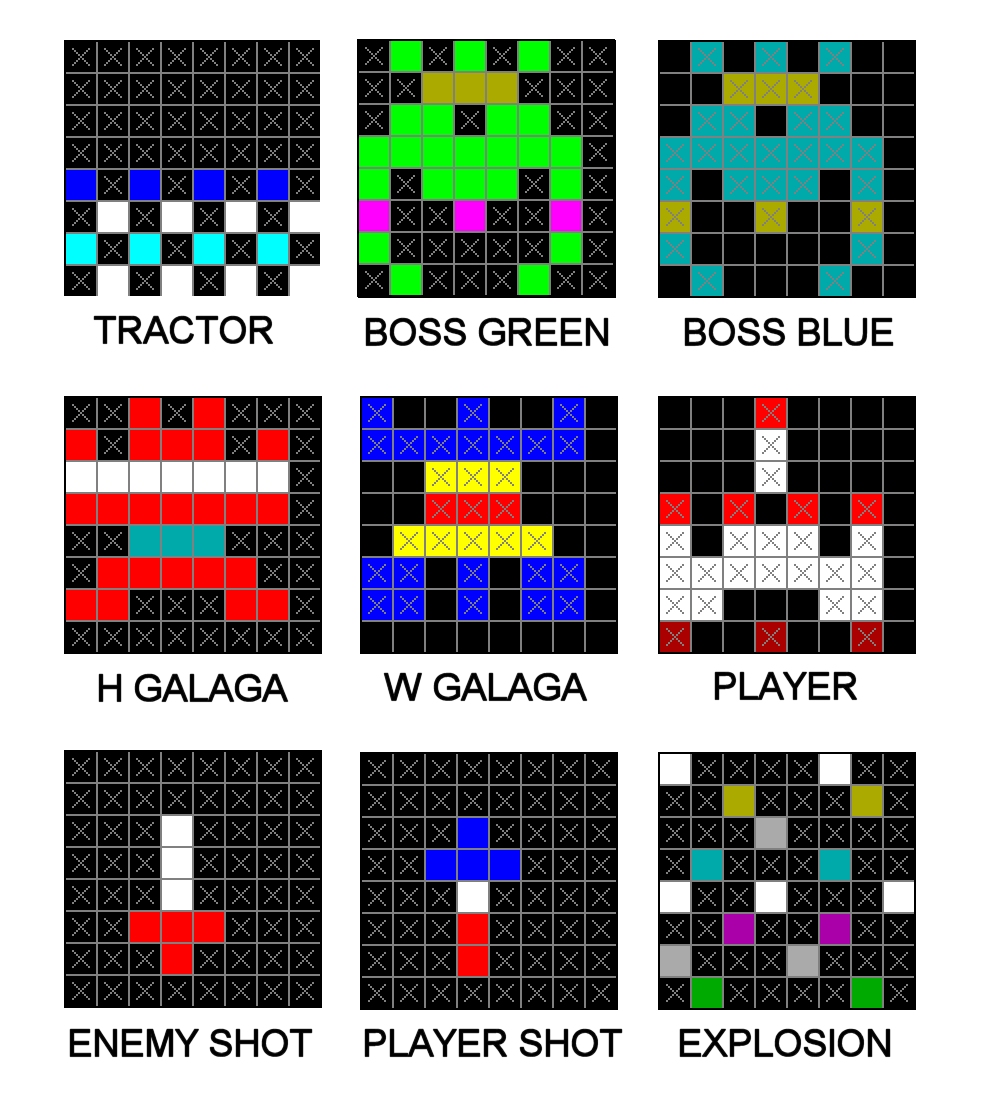 Well done! The best Galaga-style game I've played on the Zeddy. I haven't managed to make it work with my zxpand joystick but I'm still figuring that out so maybe my fault.

I don't have UDG or Chroma, just needs a catchy song on the zonx to be as good as can be (unless you make it hi res without extra hardware.

.
Going straight to my Top Ten!