This is a tribute to.. Vickers probably.
The game is a direct C conversion of the "Hangman" game taken from the ZX Spectrum BASIC manual.
It requires 16K and a graphics expansion, G007, WRX and ARX modes are supported.

It is meant for 2 players, a first one will type in a secret word, the second one will have to guess it by typing the single letters.
It is advisable not to let the second player looking at the screen while entering the secret word ! 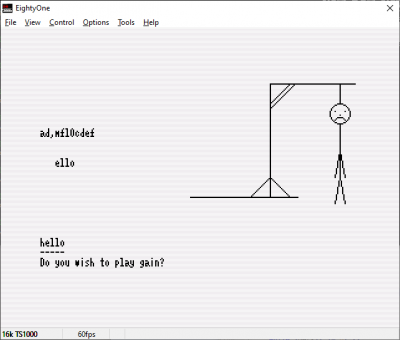 Post scriptum: the graphics modes could not work well on EightyOne, they heavily depend on the version you are using.
As an example, in the (current) recent versions, the ARX mode "rolls" the character rows out of the expected intarlaced sequence.
Please report problems only if you tested the game on a real ZX81.

ARX mode - is anyone able to share technical details on this mode - I haven’t heard of it before until tonight..

Is it pseudo high res or real? A trick real or real real hires like WRX is real?

Anybody have a driver disassembly and is it reliable on a real machine?

Sorry a lot of questions but details on it seem sparse .. Very interesting though..

stevenmcdonald wrote: ↑Thu Jun 23, 2022 1:13 am ARX mode - is anyone able to share technical details on this mode - I haven’t heard of it before until tonight..

Is it pseudo high res or real? A trick real or real real hires like WRX is real?

It’s an internal modification, that enables UDG (user defined graphic characters) from RAM. And then 16 different char set are possible, and the driver uses 12 char sets on the screen at once, so the first 2 lines uses 1st char set, next two lines uses 2nd char set etc. This way the whole screen is filled with 12 different char sets. Now you change the char set in RAM for full resolution hires.

Hi thanks for the info there . Very novel.
It just needs static ram in the 8-16k region so that it can be access during refresh time .
A unique way of doing it for sure. 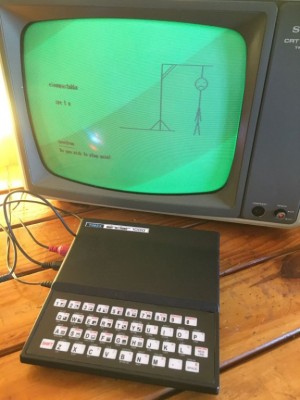 I typed this game many times on the ZX Spectrum as a kid and seeing it again brought many feelings of nostalgia!

Here the WRX version is running on my 16k internally upgraded ZX81.

thankyou!
Probably I should have kept the Sinclair font, I just didn't think at it
Top

Be aware that EightyOne is a bit picky regarding the Memotech HRG mode, I recommend to try different versions of the emulator and to disable the "Advanced Effects" in the "TV Emulation" section (this same flag usually needs to be enabled when the TS2068 High Resolution mode is needed).

Hi Stefano
something is strange: when I enter the first letter of the secret word to be found, it is shown on screen (upper line), but is overwritten by the second letter entered later. All following entered letters are shown correctly on screen.
I used a real Zeddy with BigBang-rom and EOV1.23 (same result) and the WRX-version. 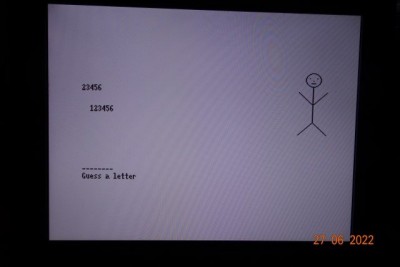 Bug. I noticed it already but thank you for pointing it out!
The Memotech version is fixed already, it was a consequence of the VT-ANSI terminal coordinates are numbered (1,1) for the top-left corner rather than (0,0).
I'm happy you like this little exercise, I'll surely post a fix.
Top

Ok, let me know if it is overall better.
I can adjust furtherly, e.g. by putting a sinclair style font, etc..