Hi everyone I've been reading about the history of computers recently and have found it very interesting learning about Sinclair, though I've found it hard to find much information or video footage of original ZX80 games from 1980 and 1981 (i.e. not including games intended for the ZX81 or modern projects). However I have learned that apparently there was a game called "Cheese Nibbler" which was printed in the original ZX80 Operating Manual (pages 89-91).

I wondered if someone could please record some video footage of Cheese Nibbler running? Either on a real ZX80 or an emulator.

I could not find any videos of the game on youtube, so I spent several hours typing it into an emulator, but despite numerous attempts, it kept reporting errors and would not run. I double checked the code multiple times and read more of the manual to see if I could figure it out, but in the end it was just far beyond my ability. Really I just want to watch the gameplay anyway (I'm not that interested in playing it or understanding the programming) so I thought perhaps someone here might be willing to get it working and record some footage.

I would really appreciate it and I'm sure other ZX80 enthusiasts would love to see it too. Thank you
Last edited by theassassin on Fri May 22, 2020 4:11 pm, edited 1 time in total.
Top

Re: *VIDEO REQUEST* Cheese Nibbler (from the original ZX80 manual)

I wouldn't call this a game by any stretch of the imagination as all you do is keep hitting newline repeatedly until the chr$ disappear, so more a programming example albeit a poor one.

I'm not geared up for video so here is a working O file of the program for you to load into your emulator and film a magnum-opus of your own.

Re: Cheese Nibbler (from the original ZX80 manual)

Ah awesome thank you very much, and yes this appears to run OK in JSEddy. Not much of a game, but still an interesting piece of history and nice to experience it!

For anyone else interested, here's screenshots of the start of the game and the end of the game (running in the JSEddy Emulator): 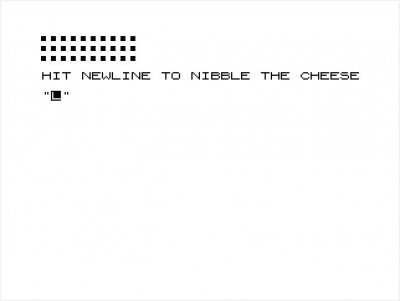 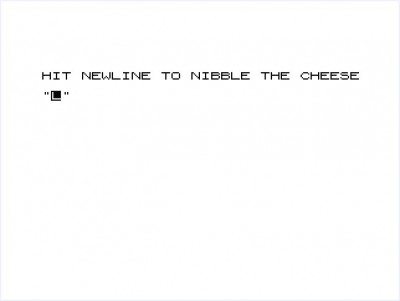