Introduce yourself to your fellow forum members - what was your journey into the Sinclair world?
Post Reply
6 posts • Page 1 of 1

As a kid my Dad used to use one. I remember he wrote a program which would output sound to a TV, 'Tunes' I think it was called and it got publihshed in ZX Computing which I am immensely proud of! So following in his footsteps, I've got Raspberry Pis and umpteen computers, have got an interest in learning and building, and recently wanted to learn how simpler computer work.

Mid-2000s I bought a whole series of ZX81 stuff, some of it worked and some not, gave it all a good go and eventually shifted stuff back onto fleabay. I had a residual broken zx81 floating around and some time on my hands so thought I would look more carefully at what might be wrong with it. Opened it up and discovered in awe the wiggly lines of an issue 1 with a simple ULA '8119'. I have an oscilloscope and determined that it is not working (maybe amongst other things) as no clock on pin 14. Would like to get this one working as it's a nice clean PCB and case, but I think I might need to replace the ULA with a new one, and so ordered a ULA81. The original is unsocketed so will need to look at removing it carefully (no desolder gun/reflow).

I did buy another couple of units online. A nice issue 3 which has it's own charm, and this one does work although tuning is difficult but not impossible on an LCD TV I have. I've been trying to use this with my oscilloscope as a reference point for one that does work, for example comparing to the logic reports from others on the forum. I'm going to post elsewhere but I was wondering how to differentuate a Pulse, High, High Pulse, Low on an oscilloscope - I have a laser logic probe but it doesn't seem to pick up the pulses.

And I have a third unit, also an issue 1, also faulty, but with a socketed Ferranti ULA, but it's had some work done on it by a past owner to replace the power socket (same type of jack but different layout) and I don't know why but a capacitor and R27 have been moved (see attached pic), so I am a bit loath to plug in my new ULA81 into it to test, but I might do after some checking.

The only other thing is I'm searching for a decent description of how the ZX81 actually works, what happens on power on, does it boot in the same way as a PC, who issues the instructions. Dumb questions I know!

Anyway, hope to see you around! Will
Top

Welcome on board Will!

You forgot to attach the pic.

Here is is. I think I got caught our by max resolution. So this is a third board I have. Thanks for the welcome Lardo! 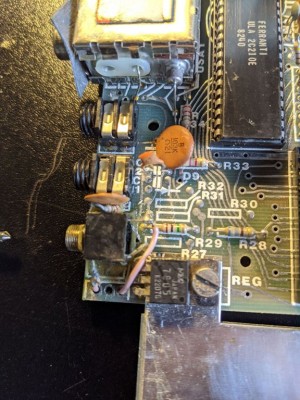 Welcome on board Will!

I see you have already started a new topic.

For fault finding, I strongly recommend a new and individual topic per machine, otherwise it can get confusing when members jump in and give advice about one computer in between another post about another one.

Yeah, that’s a bit of a bodge

The correct mono 3.5mm socket can still be obtained from some electronic suppliers.

Thanks Mark, I think I ordered one the other day. I notice that other boards online have this capacitor and resistor in this config so maybe it was the case on some boards. Still marveling at the Issue 3 though!
Top
Post Reply
6 posts • Page 1 of 1