Hi. I finally decided to fix my Spectrum audio output. It's mute but sounds good using an amplified speaker.
I identified the problem at the internal speaker. It measured as open circuit. I thought it was an easy fix. Exchanged the speaker with a 32ohm one (those worked fine with other speccy boards. A bit louder perhaps) . But I now hear a medium/high pitch noise. Changed the transistor and the diode, and tried another speaker.. noise persists.. mic output is still clear.
Revieed the track from ULA pin 28 and looks good.
Put an oscilloscope to ULA pin 28 and it is really noisy (mic output isn't) 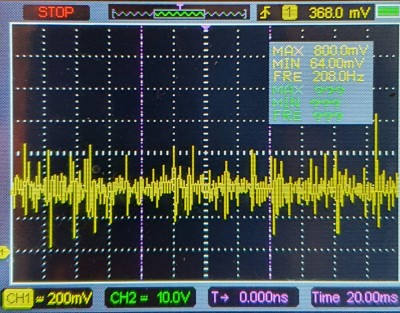 Then I measured pin40 GND, oscilloscope gnd probe is attached to the heat sink. 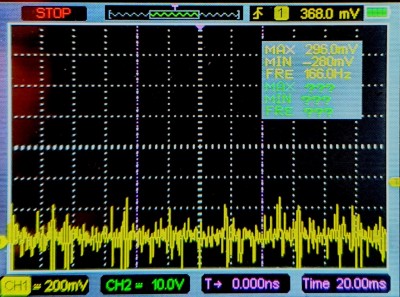 Maybe the noise is a problem with the power supply - collector TR 7 (at the real Spectrum) is directly connected to the +9V Input. I would try to take an other power supply ...
Top

Yes. The board is very similar to the Timex/Sinclair and that part is the same. Transistor is a different part but can be safely replaced with a BC337..
I think the diode should prevent that noise to reach the ULA. PSU is somewhat noisy but not that much and noise is different at both sides from the diode. Your advice made me review all traces and connections and Transistor was misplaced.. (so thank you!) now I fixed it and have the internal speaker working but noise at GND and ULA pin 28 persists..
Should I concern about that?
Display image is good. Some minor jailbars, I wonder if should I ad bigger capacitors at C28 and C75? (That helped before with jailbars at real Issue 6a boards more than the 12v ram decoupling published elsewhere..)
Ernesto
ZX80, TK83, CZ1000, CZ1500, TK85, CZ2000, CZ1000Plus, CZ1500Plus, CZ Spectrum, TK90X, CZ Spectrum Plus, ZX Spectrum, ZX Spectrum+, ZX Spectrum +2, Sinclair QL. And more to come

Digital computers are electrically very noisy. This is due to multiple transistors inside the various chips switching on or off at multiple different rates.

This is why there are so many (decoupling) capacitors used (modern rule of thumb is at least one per chip).

Because the switching on/off (especially the driver outputs of the chips) is fast and they have to drive the parasitic capacitance of the relevant address, control or data line, this causes a short and sudden, but relatively high current to be drawn from the power supply rail. Also with some digital chips that use two transistors per stage, for a very brief moment in time, both transistors are partially on, causing a brief short circuit! All this in turn briefly causes both the voltage on the power rail to drop slightly at the chip’s power pin AND the 0V/GND pin voltage on the chips 0V/GND pin to rise with respect to the voltage on the board power input or voltage regulator 0V/GND connection. This is because the current flowing in the supply and 0V/GND PCB tracks causes a small voltage due to the sight resistance of the conductors.

In an ideal PCB layout, either a four layer board would be used with one layer being only used for a ground plane, or a star earth arrangement would be used, where each chip (or other active circuit component) would have its own 0V/GND connection back to a single 0V/GND/earth point (normally where a voltage regulator is used, it’s 0V/GND terminal, otherwise the first capacitor after the power input connection point to the board).

However, because the Spectrum was designed to be low cost, and less was known about power distribution problems, neither of these techniques were used. This did bite Sinclair with a long winding 0V/GND and hence noisy 0V/GND on the QL boards… and an official modification resulted…

Modern practice is to use 100nF multilayer ceramic capacitors, at least one per chip. In a ZX Spectrum, for eight 4116 DRAM chips, that would be 800nF compared to Sinclair’s 88nF!

The other important thing to know about decoupling capacitors, is that the leads should be as short as possible and they should be connected as close as possible to the power and 0V/GND pins of the chip.

Incidentally, 100 to 150mV of noise on the power rails/0V/ground is normal for a digital computer. A typical ZX Spectrum is not likely to be as good as this though.

Thank you Mark,
As you ca see there is at least one ceramic per IC although these are mostly 22nF each. 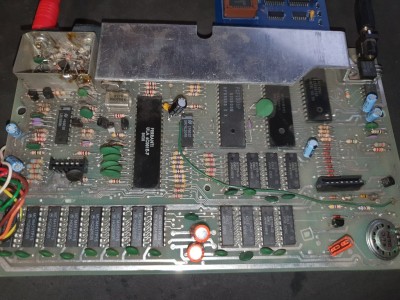 Also, what type of PSU are you using? An old original type? Is it an unregulated type?

Or are you using a modern switch mode power supply unit (SMPSU)?

I won’t have time today, but later in the week, or at the weekend, if you think it will help, I can post up some images from my ‘scope of a Sinclair Issue 6A board.

If you want to hear a real noisy computer speaker, get an Acorn BBC Micro. In amongst the (surprisingly loud) general hiss and noise, it also produces noises and sounds that sound like some special effects from a budget sci-fi movie…