Nabbed an Issue One!

Nabbed an Issue One!

Got this recently from it's original first owner. It was offered for sale with 3 microdrives, a complete Iss 6A Spectrum (in rubber key case), PSU, IF1 and a few other bits. There was no mention in the desc or title that it included an Issue One, and I don't think the seller had enabled visibility to ebayers abroad so I think I get a really good deal.

It's a board only, has had 2 RAM chips swapped and socketed, the original ULA had been changed for a newer one (and cockroach mod also removed). The Z80 has a late '83 date (and newer solder), so that's also been swapped. I did hope that the 6A it came with may have been in the original Issue One case, but it isn't and also has the later bluer keys.

It has 2 wires on the back going from the smaller k/b connector, direct to the ULA, which seems to be a common feature, so I assume that's factory. The pic shows it with the socketed chips and heatsink removed, just before I gave it a clean.

And it works! Checked voltages, then plugged it in to a CRT and it was simply fine. Nice when they don't require any attention (the 6A works fine too, apart from the k/b membrane). 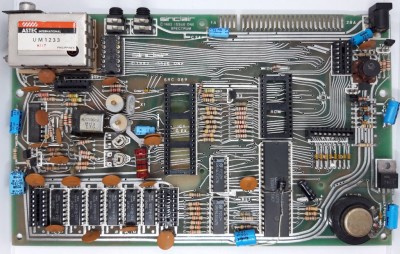